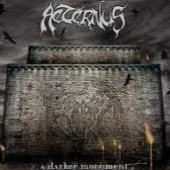 Bands have been trying to redefine their sound for years struggling to find their little niche to plant their flag and stand tall. Some make it and some just fade away. Bergen Norway’s Aeternus was exactly like that a few years ago... they started in 1994 as a strong Black Metal band, and have slowly reinvented themselves throughout their career.

Once a feared and exalted Black Metal band that commanded like a monarch in their beloved Norway, Aeternus slowly and methodically moulded their sound as they grew and changed through the years into an even larger beast. Now they play a Blackened version of Death Metal that still holds the power their Black Metal always did, and adds a whole lot of cruelty to it. Now their blood-dipped riffs and war inspired thunder hold a strong command and strength that cannot be stayed.

Nine brutal and vicious songs lay on the CD, that is nine times that you get to have your mind blown and your butt kicked. 'Slavestate' and 'Darkstorm' are just two songs that perfectly meld the two worlds of darkness and evil in with pure violence and gore into one. Never have I heard a band that was amazing beforehand (I have heard a few albums) and now after a slow climb has gotten even better with the changes.

Metalheads... you cant go wrong here. Aeternus is a band that you need a few CD’s into your collection. With honest yet bloodthirsty music like this, you cannot go wrong with owning this slice of metal. The choice is yours. Aeternus just is a solid, very impressive band.