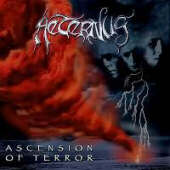 ::   ::
Type: Full-Length
Release Date: 2001
Label: Martyr Music Group, Inc.
Genre: Black, Death
1 Possessed By The Serpents Vengeance
2 Slaying The Lambs
3 Ascension Of Terror
4 The Essence Of The Elder
5 Warlust
6 Wrath Of The WarLord
7 Burning The Shroud
8 Denial Of Salvation
9 The Lair Of Anubis

Way back in 1993 Ares (vocals & guitars) formed Aeternus that released no less than four full length albums and a demo of raw and brutal dark metal. With "Ascension of Terror," they are jumping back in your face with a real kicker.

With a little help from Radek (guitar), Erik (drums) and Morrigan (bass) Ares' band is still very capable of driving your neighbors' and parents nuts with its own style of metal massacre and doesn't seem to surrender to a smoother or even less ambient type of mood. Be warned 'cause this stuff is not for a fragile heart! The back-bone of "Ascension of Terror" is made of a mixture of blackened death metal with a highly aggressive and impressively fast rhythmic section and I wouldn't be surprised if the instruments got destroyed while recording this album! Amazing! But amongst all that destruction I could discover some nice and melodic segments as in 'Possessed by the Serpents Vengeance'.

The pace and mode are constantly shifting and at times, prog sections are even incorporated in the already complex musical structure such as in 'The Essence of the Elder’, 'Warlust' and 'Burning the Shroud'. My preference goes for songs number three and eight. The first one, gets progressively louder until reaching a slower, mid tempo and doom-ish mood with very deep vocals, killer riffs, good harmonies and the top production brings all the instruments upfront, loud and clear. The other is called 'Denial of Salvation' also starting slowly except that this time around, the dark intro is made of screams, thunder, piano and clean guitar but then the very 'doom-ish' and awesome guitar work joins in before the pace picks up and alternates with the moderate version until reaching a horrifying climax of deep vocals plus screams and chilling guitar solos!!

Bottom Line: A must have for the fans of the genre.

Over a year after Aeternus’ recording session in Grieghallen Studio, the long awaited new full-length is here and what a sweet reward it is for those who waited. “Ascension of Terror” is pure devastating brutal death metal and their new material consists of 9 tracks that are much shorter and much more intense compared to what we’re used to hearing from them in the past, but still blended with typical Aeternus riffs and dark atmosphere.

After the first listen I had no doubts that this music comes straight from their hearts and even lower parts of Ares’ gut because his vocals are deeper than ever and the music just molests your brain without leaving even a single cell un-blistered or at least painfully irritated.

Most of the songs are 10000 pound hammers that will crush your skull and leave you breathless, but what makes Aeternus so special are their famous mid-paced and slow melodic riffs. Dark tracks like ‘Ascension of Terror’ are build around ‘beautiful’ lyrics that start with “I am here to bring you fear into your life...” and end with “...beyond panic – you will – die.”

Then there’s ‘Denial Of Salvation’ with such a dark intro that you will think twice about turning off the lights before going to bed. I could go on, but there are countless moments throughout the whole album that will put this epic above most of the releases you’ve heard this year. Ares, Erik and Radek show once again that Aeternus is the class of its own and if during these masterpieces you don’t start swinging your body like orphan in its moments of silence and banging your head thinking of fear, pain and death there must be something terribly wrong with you.

If their next album will bring back classic guitars and more unholy dark passages I will burn in hell (not that I won’t anyway) if I don’t give them a straight 10.