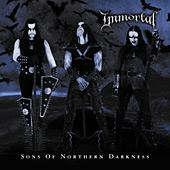 Type: Full-Length
Release Date: February 4th, 2002
Label: Nuclear Blast
Genre: Black
1 One By One
2 Sons Of Northern Darkness
3 Tyrants
4 Demonium
5 Within The Dark Mind
6 In My Kingdom Cold
7 Antarctica
8 Beyond The North Waves
MetalBite on YouTube

I admit that I still regret the split of Immortal. With the exception of Blizzard Beasts, the band always delivered black metal of the highest quality. Their manifesto of fury, Pure Holocaust, remains untouchable. Nevertheless, albums like the here presented Sons of Northern Darkness enriched the genre. Although they signed a contract with the somewhat greedy guys of Nuclear Blast, Abbath and Demonaz did not break with their past. Nevertheless, Sons of Northern Darkness was not the unofficial second part of a previous album. It did not possess the weird aura of their debut and it failed to deliver the inferno of Pure Holocaust. Its eight songs did not generate the majestic feelings of At the Heart of Winter and the technical masturbation of Blizzard Beasts was fortunately a thing of the past. The guys of Immortal showed the next step of their development while offering a mix of high-speed songs and almost elegiac tracks. In alignment with the different compositional patterns, the varied guitar work commuted between bulky riffs, flattening chords and more or less melodic lines.

"Demonium" was the only song that could not keep up with the other tunes. Its riffing reminded me a little of the hectic fourth full-length of the group. However, Nuclear Blast had opened the wallet so that the flawless production improved the impression of every single track. As a result, there was no need to stigmatize the song as a flop. The slightly convoluted guitars were just unable to develop their full effect. However, on each and every album, one track must be the worst and, as mentioned before, "Demonium" reached at least an average level. The good news is that it was much more difficult to identify the greatest highlight of the album, because there existed a lot of pretenders to the throne. One candidate for the award was "In My Kingdom Cold". It bundled the competencies of the band and demonstrated them within intensive seven minutes. Blast beats fueled the opening riff before the band reduced the velocity in order to make way for the less craggy chorus. But the most concise section of the song was marked by the ironclad mid-tempo part that set in at 3:42. The stoic rhythm guitar laid the foundation for a minimalist yet mighty melody line.

In general terms, the band made good use of its well-known advantages. Small details like a simple wind sample at the beginning of "Antarctica" were enough to create an icy aura, the hoarse vocals did not lack of power and the guitars combined aggressiveness and harmonies in a more or less faultless way. Appropriate breaks prevented that the songs suffered from repetitiveness. The almost overlong pieces of the album´s second half were even better than first four tracks. They emphasized the Nordic atmosphere sustainably. "Beyond the North Winds", for example, gave rise to endless white fields and inhospitable icebergs. While offering a fine mix of desperation and combativeness, the song was a worthy conclusion of the sixth studio album of the mature three-piece. Some might say that the full-length offers too many mid-paced parts. I think it is pointless to philosophize about this point of view. Sons of Northern Darkness was defaced with a ridiculous cover, but it was and still is definitely not a lame album. Although it lacks a bit of spectacular elements, its grim songs still belong to the best examples of Norwegian black metal.

“The icy dawn lifts with a horizon like nordens on fire...
This ride will be the one...”

This is the one, indeed. Immortal on “Sons of Northern Darkness” takes you on a ride through 8 amazing tracks that can only be described as breathtaking glorious hymns that will make your fists pump in the air and you heart jump out of your chest in the most celebrated victory dance you’ve ever experienced.

I truly don’t know if I can describe this album and give you at least a glimpse of how powerful and astounding this masterpiece is. If I could use only one word and move on to the next release I would use “perfect,” but I can’t. “Sons of Northern Darkness” took over my heart and soul and I’m having hell of a hard time taking it from my player and replacing it with something else.

Compared to what our Bergen-based outfit did on their previous releases, “Sons of Northern Darkness” takes every single department to another level and shows that the full month spent in Peter’s Abyss studio was not wasted ‘cause everything, and I mean everything, is perfect here. From song structures, arrangements, atmosphere to production I can’t find even the smallest imperfection, but this album is not about finding mistakes or any faults of any kind it’s about taking heavy metal to another level of immortality and glory.

That’s not just black metal, but heavy metal as a whole genre. This opus has more pure traditional metal influences than any Immortal album had ever before, and while black metal is the main core, 80’s thrash or even pure rock riffs are incorporated into every track with such precision and tact that anyone who doubted this band of having excellent composing ability will change his mind and join the forces of the army of northern sons.

From the ripping guitar lines of Abbath on ‘One by One’ or the majestic ‘Beyond the North Waves’ to the thunderous drumming on title track or ‘Demonium’, Immortal’s trio sets the bar so high that even though 2002 has just begun, I find it hard to imagine someone surpassing “Sons of Northern Darkness” as the album of the year. Brutal but with irresistible melodies mixed with acoustic, atmospheric parts, I pronounce “Sons of Northern Darkness” as the epic of the new millennium.

Bottom Line: I don’t know if you ever had this feeling of being proud, victorious and on top of the world after listening to an album, but I had and it was after “Sons of Northern Darkness”. If this CD doesn’t make its way into your collection, you’ll be making enemies.