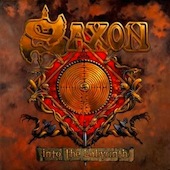 I discovered my weakness for the music of Saxon at a very late stage. Due to the rather low quality of their albums such as Innocence Is No Excuse or, despite its strong title track, Crusader and in view of my own innate ignorance, I did not care about the works of the band. But one day I came in contact with them by accident. I do not regret it, because I like the albums that they released since Unleash The Beast with one exception. Unfortunately, this exception is exactly the here reviewed full-length. Into The Labyrinth leaves an ambivalent impression for different reasons. A huge problem is the technical implementation of the songs. The polished sound lacks of metallic edges. (Yes, with all due respect, they are old men, but I did not know that they have already lost their teeth.) Right from the start, the sprawling opener illustrates the dilemma. The leisurely rocking 'Battalions Of Steel' is well designed, melodic - and completely harmless. The solemn chorus of 'Valley Of The Kings' points in the same direction. Too much sticky emotion, too little metal. What a pity for the good instrumental part after the second chorus of this song.

But more or less the entire album, and this is the next serious defect, lacks of currishness. Saxon prefer to offer very smoothly configured tunes. Aggravating this situation, some tracks seem to be allergic against any kind of compositional ideas. The incredibly weak chorus of 'Crime Of Passion' makes clear that one is listening to a real downer and further mediocre pieces like 'Slow Lane Blues' or 'Protect Yourselves' show impressively that good bands do not always write good songs. (Unfortunately, the opposite is true. Bad bands always compose bad songs. I do not want to mention names in this context. This would be unfair to Sabaton and Sonata Arctica.)

Thankfully, Saxon also offer at least two strong tracks. The vigorous 'Demon Sweeney Todd' is the most aggressive and fastest piece of the album. Among other things, it holds a brilliant part in the middle of the song. 'Hellcat', the second highlight, scores in particular with its well succeeded chorus. Additionally, a third song indicates the potential of the band. 'Live To Rock' thrives on an effective riff, although it is very simple at the same time. But its chorus line offers nothing else than the desire of the band to get radio airplay. Too bad that the commercial arena rock is not the playground of the English working class and lyrics like "Live to rock / Never stop" are painfully primitive, too put it very politely. However, irrespective of its rare highlights, the album is just too long and lacks of compactness. Quantity before quality is always a very questionable guiding principle. Hard to believe that Saxon were not aware of this problem.

It is up to you. If you like to listen to music whose degree of harshness is significantly below that of albums like Call To Arms or Metalhead, Into The Labyrinth will possibly meet your taste. But if this is not the case, you will probably agree that Saxon made exceptionally a comparatively sloppy job. Although the contribution of each and every band member is technically flawless, the overall result cannot convince.