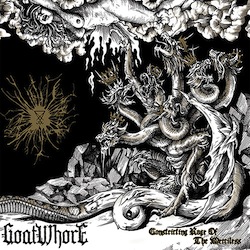 Okay, so I’m late to the game on this one. Call it laziness, call it not paying attention, call it what you will, but I've never paid attention to Goatwhore until just recently. I had heard some tracks here and there and they didn't do much for me, probably because their previous offerings were more in the realm of black metal.

A night of late YouTube browsing led me to “Baring Teeth for Revolt” and my anus just wasn't ready. I can’t quite describe the feeling I had when hearing this, but it was like savage bliss. The guitars, drums, riffs, it sounded so violent I couldn't believe just how awesome this was. Roughly five minutes later I had the album ordered. I had to have this.

Sammy Duet is well known for his work in Acid Bath, and for good reason. Acid Bath were an amazing band that pushed the boundaries of what we call rock and metal. Thing is, I had no idea he was in Goatwhore. If I did, I would have paid more attention a long time ago, as I love the fuck out of Acid Bath.

Here we kick things off with “Poisonous Existence in Reawakening” and boy, these guys don’t fuck around at all. Straight for the throat, chocking the life out of you, riff after riff. This still has the black metal vibe, which is also very apparent on “Unraveling Paradise”, but it’s done extremely well. The songwriting is top notch, the arrangements are very carefully thought out, and everything just makes sense musically. The production and mix on the album are what I would call perfect for this type of album. Punchy, clear, but not too clear, if you know what I mean. This is still definitely rough around the edges and has a lot of bite to it. It’s not overly polished at all.

“Baring Teeth for Revolt” just may be one of the best metal songs ever written. Yeah, I went there. But everything about this song just screams METAL. From the riffs, to the outstanding vocals and perfect drum work, this is just a slice of fucking metal heaven. A big slice at that. Also, that has got to be one of the most brutal, most aggressive guitar tones I've ever heard. Shit is just violent. Sounds like Sammy’s ESP wants to fucking rip your spleen out.

The album features some more dynamic work rather than severely punishing death/black metal. The dynamics are laid out nicely and it appears that there’s something here for everyone, though I’m sure Goatwhore couldn't give a fuck about anything or anyone. These guys just play the music they want to hear. I mean you’re not exactly setting yourself up for success with a name like Goatwhore to begin with. This is top notch stuff, definitely check it out if you like your metal fast, aggressive, and no nonsense whatsoever. You will not be disappointed.