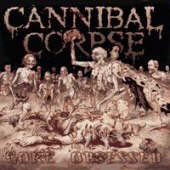 This is getting ridiculous. How, out of 11 tracks, do I get to review the album based on 3 full-length songs from which one barely hits a 2-minute mark (the remainding 8 fade out after 1 minute)? Well, maybe I wouldn’t be so pissed if the best stuff didn’t actually start after first 3 songs.

Let’s back it up a little. Opener ‘Hatchet To The Head’ opens with such aggression that only Cannibals and a handful of today’s bands can pull off and while I didn’t expect drastic changes I hoped for a little more innovation in song structures after their latest more or less average releases. Surprisingly enough I didn’t have to wait long to change my mind and with ‘Pit Of Zombies’ the Cannibals proved the Corpse is not rotten yet and there are plenty of fresh ideas for crunchy riffs and dynamic rhythms left in them.

In case you forget what these guys are all about, ‘Dormant Bodies Bursting’ kicks in with crushing blast beats and twisted riffs mixed with a slower middle part where George “Corpsegrinder” Fisher growls and screams his balls off to pit-friendly guitar work.

I guess I should end this right here because we don’t review 1 min. samples but what I’ve heard is so thrilling and incomparable to their previous work that I would be committing a sin not giving you at least a glimpse of what’s to come. While it might sound a little strange, Cannibal Corpse feels a little more accessible to the listener and while it’s not melodic death and speed is still the main component, most of the tracks seem to be very well balanced between gore-filled onslaughts and slower groove sections. While ‘Hung and Bled’ must be one of the best songs they’ve ever written, ‘When Death Replaces Life’ marks first Cannibal’s ‘ballad’. That’s of course based on 1-min. samples so I’d better shut up before I say something I might regret later on.

Bottom Line: Definitely the best Cannibal Corpse album in years and while “Gore Obsessed” doesn’t bring anything new, aggression and a will to destroy seemed to find its way back to what looked like slowly degenerating corpse.