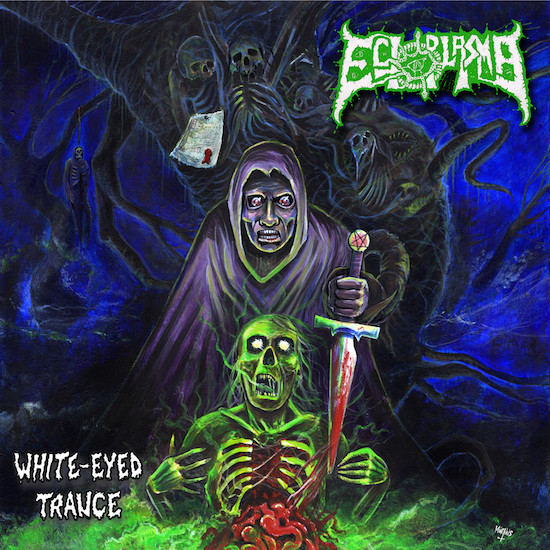 In their endless quest to push and support current underground acts that perpetuate the odor of vintage death metal, on October 31st, 2019 Memento Mori is proud to present ECTOPLASMA's highly anticipated third album, White-Eyed Trance, on CD format while Repulsive Echo Records will be handling the vinyl LP version, which will follow later in the year. Today, MetalBite is giving you a second peak into bone-breaking release with a premiere of 'The Oak Spewed Foul Whispers' and review of the album below.

It's hard to accept that Ectoplasma are not a name that has garnered more underground familiarity, given the involvement of Giannis Grim (Carnal Dread, Humanity Zero, etc.), I would at least expect most people to have heard their 2018 record Cavern of Foul Unbeings that certainly should have been mentioned among the obscured and higher ranked albums within the present genre, with songs like 'Entranced in Blood', 'Mortified and Despised' and 'Reanimated in Toxin'; killer fucking tunes!. Regardless of how good a record that was, it got swept aside by the whirlwind of more anticipated death metal releases at the time, therein randomly casting them among many other faces. Nearing 1 year later, Ectoplasma are back with another record, White-Eyed Trance due out this Halloween. Simply put, Ectoplasma play as though it's the only thing they know or like they've been at it since death metal had been conceived. Production-wise their sound has progressively gotten clearer (not cleaner/over polished) since 2016's Sitting Coffins, but their approach to the music has not changed; this is the same Ectoplasma driven by the grandeur and grotesque of a germinal death metal advent.

Lots of influences creeping around Ectoplasma's lair, notably early Sinister and, Autopsy, in the drumming, riffs and vocal areas; their breed of death metal is a mix of both the old and modern era but pulls strongly more towards the former. Ectoplasma gives you the impression White-Eyed Trance could have been released in the early to mid-90s. The raw sound of the genre now climbing from the pits is there, along with the chaos brought by death metal's growing intensity in the 90s, pulses lively. The tracks are fairly lengthy, but the members do a decent job of merging their song-writing style which juggles and gambols with the facets home to the genre. The music here is also raided by some nostalgic guitar work that reminds you of old horror movies; such can be heard scattered throughout 'Psychomanteum Immolation', 'White-Eyed Trance: Choronzonic Covenant' and 'Alucarda, the Daughter of Darkness'; which by the way, if you have not seen that underrated, and to many, obscure film (Alucarda), then you need to if you're a horror fanatic like myself. 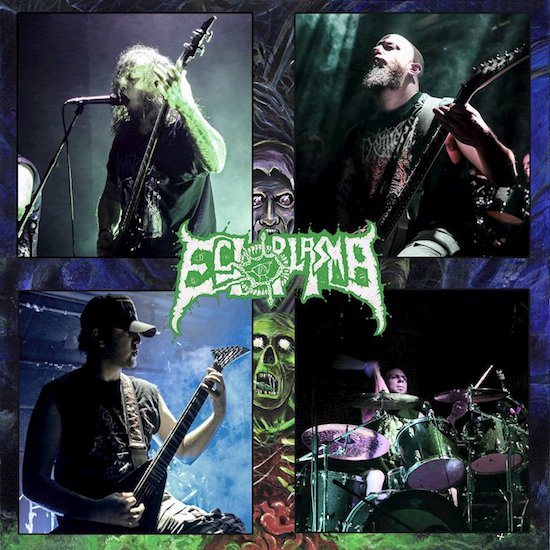 'Eviscerated in the Howling Winds' for me is among the top tunes on White-Eyed Trance, from the manner in which it opens, to its closing, gives you a thrilling sprint through the pristine and privileged halls of the genre. It's then upheld by 'Psychomanteum Immolation's brutishness. Having always been a fan of horror tales and movies, hearing the spectral tones of 'White-Eyed Trance Choronzonic Covenant', 'Alucarda the Daughter of Darkness', and 'White-Eyed Trance: Ensnared in Devilry', did serve-up to be an even more gratifying session. The guitar work, drumming and structure of those songs are for me the best to be heard on the album. Not discrediting the faster more vicious tracks, I prefer the charm of contrast in music that when appended to death metal gives the effort a sense of consummation. Thus said, I hope more emphasis is placed on those aspects on future releases by the band given how seamless they were incorporated.

For an overall evaluation of White-Eyed Trance, I think it's a strong release but not better than 2018's Cavern of Foul Unbeings, at least for me. That record is a testament to the abhorrent currents at work in the underground death metal arena, which has spawned some of the finest material as far as the modern era of the genre goes. This record is somewhat of a consolidating effort that furthers the work done on past releases to its current state. I understand Memento Mori will be handling the cd release, with the vinyl being placed under the management of Repulsive Echo at a later time during 2019. Ectoplasma are still a growing force in death metal, their accursed mark has been felt by many now begging for more.