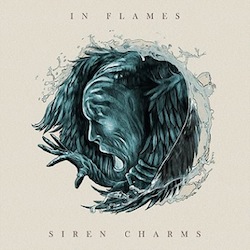 While it sold great upon being first released, the critics mostly give it a big thumbs down. That may be because these guys changed or have changed their style of music since their beginning. It is no surprise Jesper left the band probably because of that reason, they wanted to diversify, and he wanted them to be what they started as which is melodic death metal. So be it as it is, this one by far no matter what critics say is a waste of a purchase. 'Don't buy it' they say or use such things as 'it makes a good coaster for a cup'.

Musically, what this has to offer is melodic metal, some groove sounding twist to it, mid tempos, all reflecting the guitars at least. I'll throw in the fact that some songs are played with clean tone, but not all or nearly all the songs are like that. They still have the thickness and good production quality, though the intensity has come way down from what I left off with them which was Clayman and out of curiosity I stumbled upon this one. I didn't think right away that this was wholly bad per se, I just thought that they've just taken a huge turn.

Anders sings with a few different styles which accompany the music well. Screaming, a lot of clean voice (which kind of makes them sound like metalcore) and moderate throat. All of these different types I feel work well with the music. I saw a somewhat recent interview with him featured and he's kind of trying to dissuade listeners from discounting the musical direction they've taken post-Jesper. I like how they sound still, but a simple "like" from me doesn't justify their abduction from melodic death to more of a melodic/groove/alternative gig.

Song by song I think the sound of the music and the feel/vibe from their songwriting style now is still good and I really enjoyed the album. It's not because I myself as a human being is getting older, it's because I still think that what they have to offer musically the guitars are still heavy, all of the songs are lacking acute intensity though. They were never really huge on intensity, just melodic guitars and endless screaming. Their adjunct to the musical community is not near retrograde, it's experimenting with their sound plus the leads are still quality.

In Flames fans of the old may as they show on the reviews come up with negativity, but I come up with positivity. They still have it musically though Jesper left the band years ago, I feel that the sound is still high quality, just mild. I'm not going easy on them, I'm just saying that I don't agree with other critics. I think In Flames will go on strong for a while. I'm still to remain a fan of theirs despite their change in musical styles. They'll always remain a good band to me, I think listeners have to give this one a chance it's not garbage!