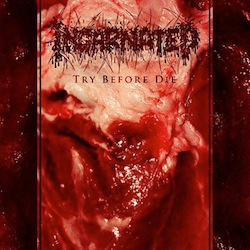 That third album, always a challenge. But doesn't look like it is for guys from Incarnated. Fans had to wait a little for this album (previous full-length album came out in 2006), but I believe that their patience has been rewarded. Guitars sound like old Entombed/Dismember/Grave (my favourite sound). Vocals typically grind-core-ish, so basically without the lyrics printed out, you won't be able to understand much. The music is somewhere between grind core and really brutal death metal. Tried to find some information about the studio, where it's been recorded, unfortunately there's nothing on the internet about this, and the band's webpage is unfortunately not up to date.

But let's get back to the material - this is a serious, non-compromising death metal for fans of the genre - this solid piece of material is for you. You want to scare the hell out of your neighbors? This is definitely for you. And what is always a plus for me in such materials - this is raw, really raw, but you can still get some solos or more like solo-like melody lines. And I definitely have to say, that with all the rawness, there is no problem in hearing each guitar melody line, so a point for good quality, album produced really well. And this is one of those albums, when you think "This is the album with strongly established style and it's new. Why all the bands which were playing this style in the past, decided to switch to something else?" The question to which I will probably never get an answer. "My Brother Cain" is probably my favourite track because of a mixture of furious blast beats and a slow down in the middle, with nearly punk drums and my favourite vocal sounding. Amazing track after which you should know whether it's something for you or not. And the album cover is a good hint to what you get buying this album - a proper chunk of meat, raw, unprocessed and gory. And since I always like to pick some technical imperfections... well, there are none here.

The description says that it's in the vein of early Hypocrisy, Nirvana 2002, Nihilst and Vomitory. I guess that there's not much more to be said, there are no surprises here. Amazing how a band, which started in the early nineties, still sticks to their true style and keeps on perfecting it with each new album. And if you add the fact that the band's guitarist and vocalist Pierścień also plays in legendary grind core band Dead Infection, you can guess the quality of the material you get. This is some serious grinding, concentrated in 9 tracks lasting nearly 35 minutes. Caution: don't listen to it, when you have any sharp objects and other living creatures in the same room.