I do not know whose help or what unprecedented circumstances of nature came to aid with creation of Incarnated. Was it an excess of bleakness in the housing projects or greenness of surrounding forests? Maybe it was too strong of indoctrination of priests in black dresses “grabbing” people by the throat making sure that this "only truth" was the only one preached? Or maybe it was because the broth was too salty, and cutlet not raw enough??? Fuck all of it!! Incarnated exist for 22 years already and is doing well at what it does. You can complain that they do too little, but I will say that you should enjoy what they do, because when they do it ... the blood spurts! "Try before Die" is their third full length and many butcher stores would be proud of such quality bloody meat. On the Polish market square a major supplier of full-blooded goods is a Selfmadegod Rec., therefore, probably, also this time new work of Incarnated ended up in their hands. I have to say that the package offered by Selfmadegod Rec is interesting-alluring. From an ordinary jewel case CD, through deluxe version of the package with the t-shirt which Mark Riddick (Suffocation, Autopsy, Grave, etc.) collaborated on. This is especially impressive since Selfmadegod is a small, independent label. It seems to me that Incarnated opted to create a solid chunk of death metal and they succeeded. 9 outstanding tracks paying homage to Swedish death metal wave of the 1990s, dripping with gore-grind juice spurred me to do interview with Pierscien. I hope this little lengthy introduction discouraged all the nu-metal vultures, and encouraged the real death metal maniacs to the lecture. 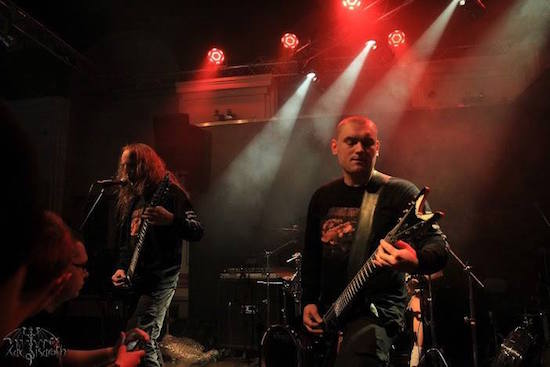 Let’s begin with a brief historical introduction, and a few words about products made ​​by Incarnated.

Greetings. Incarnated was established in July 1992, the first demo entitled "Empire of Rot" was recorded and released a year later, at our own expense. Our first album "Human Flesh" in 2000 for the infamous and already known as "evil" company Demonic Records. Currently we have year 2014 and our third album. In the meantime, we recorded a couple of splits, promos and demos (laughs) and that's it in a nutshell.

In short, I can say that this material did not meet our expectations. It did not sound like it should and most importantly, wasn’t punishing as we would like, and therefore went to the trash. We sat down and recorded it again and that time it was what we wanted.

How much did you alter the older material? Were the changes related to the sound and the recording itself or did you rearrange the tracks?

The changes concerned about everything and nothing at the same time. Old stuff was just a mistake and so that’s how it was treated.

I know that you're a big fan of Swedish death metal from the 90s era, which bands have had the greatest impression on you?

The first band I heard from Sweden was Grave and their "Anatomy Corporis Humani", and then there was Nihilist, Entombed, Dismember, Unleashed, General Surgery, NIRVANA2002 etc. During this period Swedish scene was very strong and vibrant, everything that came from this country I simply inhaled with abandon. It all began to crumble sometime around 1995, and now we have a wave of "corpse refreshing" and a storm of fakes of all kinds. Sad.

For over 20 years you actively co-create Bialystok death-grind scene. Although it pretty much crumbled at this time, tell us if - outside of Incarnated and Dead Infection - are there bands who still want to carry on and maybe if there is some new, interesting fresh fish in the pond?

At this moment there is a multitude of bands that are in Białystok or around here and play. There are so many that it’s hard to remember the names, so I will not mention any of them so others won’t feel omitted and won’t feel bypassed. That's my strategy.

Tell us a little about Bloodline Studio, where "Try before Die" was recorded. What bands have visited the Bloodline?

Bloodline Studio was founded in 2000 for my own use, but I very quickly found out that there are many people that want to take advantage of my services. This scenario helped create a normally working recording studio, but I treat working in the studio as a hobby to keep the distance to what I do and I do not want to fall into a routine and objective treatment of my passion. Recently I recorded Marquis De Sade, their reviews can be found on the internet.

Were you tempted by the desire to get help from your friends Wieslawski Brothers?

Unfortunately, no. I worked with the studio Hertz some time ago and that's the end of it. What I had to record over there I already recorded. It's very good if not the best studio in Poland, but each of the studios has its mannerisms which can be heard in all of the recordings made in them ​. For some, it’s good that bands go over there, for others not so much. I belong to the latter group, but I always said that this is a studio with a capital "S".

Private life, Incarnated, Dead Infection, Bloodline Studio, I understand passion, but how do you find time for all this?

It's very easy; just have to reduce rest time to a minimum or even better yet, working time should be your rest time. There really is no problem. When a person has too much time on their hands some idiotic ideas come to mind and he may want to play some Satanic Blues on the French horn or ocarina (laughs).

I was wondering: what are your reflections concerning Grill’n’Grind 2014? I really wanted to go there this year because the line up (Incarnated, Calm Hatchery...) was simply delicious. How does playing to grilled sausage suit you?

The most positive. The weather was good and so was the audience. It was just an open air concert, so-called Open Air, and the fact that it was called Grill’n’Grind is another matter. They serve some kind of carcass at every concert and I see no problem playing there, the problem is when there is no one to eat it (laughs). Seriously, I would recommend this event to all who like camping atmosphere, alcoholic beverages and metal. Great place, clean lake and it’s also very safe.

I found out that after 14 years of playing together Thomas left the band, what were the reasons for leaving right after recently released "Try ..." did he turn vegan? Is the successor known already or does the search continue?

Let’s go back to "T.B.D.". Is ‘Full of Victims’ a one piece really, because I have the impression that after approximately 1, 33 min. of merciless pounding a new chapter of this piece begins. Is this intentional action, or did it somehow happen in the studio?

This is one piece; it’s just the arrangement of this song. As mentioned earlier, everybody has the right to personal feelings about our creativity and this is your way of seeing this number. When we were creating "Full of Victims" we didn’t mean for this state of affairs to happen. It’s the way this song is composed. We like it, and if you do not, just delete it (laugh).

Lyrics are your share; tell us about them a little.

In our works lyrics complement the music only; they do not play the first violin. My texts do not convey any message; they’re just an integral part of a whole which is our music. My lyrics describe human anatomy, behavior, feelings that have or may occur in certain situations. Typical themes for the macabre of our region and our genre of music (laughs).

I know that you’re a musician, but also a music fan. What shocked you, what failed you, and what are you impatiently waiting for?

Shocked me:  re-edited albums badly remastered and with fucked up graphics (to suck money out of people’s pockets), failed me:  reactivation of bands generally considered a cult ones and riding the name only for the sake of financial gain (Entombed AD, At The Gates), waiting for:  Sarcofago to play live show with an old line up, when God, when? (laughs)

Thanks for your time, some word at the end maybe?

I also thank you for giving Incarnated and my humble self the time. We’re going to play concerts soon so we invite all to our performances, and not just ours. Support the underground and local scene, because without fans it will all rot. Greetings to all listeners of extreme music and see you at the concerts.