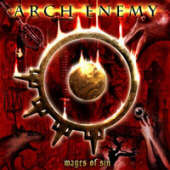 By far, Arch Enemy's first 3 releases in my opinion are their best. This is the only album by the band where I can tolerate Angela Gossow's vocal outputs. Johan Liiva, their previous vocalist, was for the most part, the most well suited for the band. His voice didn't drown out the melodic guitar riffs. He was supposedly kicked out of the band for failing to perform well during Arch Enemy's live performances. Damn shame.

The opening features soft piano bits which then segues into the band's march of awesome melodic death metal. There are so many riffs that really stand out here, but some clean guitar that I didn't think too highly of. The music throughout the album is filled with bits of melodies which are stunning and captivating. What caught me the most was track 2 entitled "Burning Angel." Angela's hoarse throat on here is still annoying, but less so then more recent releases. On here, she doesn't use many vocal effects to block out the Amott's keen guitar. It's very difficult to have the band relying on her as the lead vocalist. There are many segments of music on here that is quite original and sticks to you, as "Burning Angel" does for me. A lot of the wah-pedal was used by Michael Amott and was good on some songs, but I think that he used it a little bit too much. Christopher Amott's leads aren't as striking as on previous albums. The guitars could've meshed better with Angela's throat. I don't think that they put in enough time to weave in the guitars with the voice.

This release is a good output and worth getting. I've waived out some things that needed to be discussed discreetly so you know what to expect. To me, the last good Arch Enemy release definitely legitimately investing in. The guitars are the highlights as always, but Angela really doesn't fit the band's melodic twists. Johan is deeply missed and the band isn't the same without him.

After many years of listening to all kinds of metal I thought I had heard it all, but upon first hearing this record already knowing that Arch Enemy had recruited a new singer for "Wages of Sin", I was thinking “Wow!…who is this guy? He has a great voice”. After listening to it for about a week, I was hit with the bombshell…. “It’s a chick?!?…No Way!!” ..(was my first reaction)..; “You’ve got to be kidding! How does she..? How can she..?”… My final thought ironically was the same as my first; “Wow”.

From that introduction you may have already gauged that the vocals on this album, even though they may sounds similar to those off other like minded black/death albums, these have one distinguishing feature; they are performed by a surprisingly effeminate woman! These are not the sounds you are expecting to emanate for such an unlikely source, all credit to Angela Gossow for some astonishing vocal work. I don’t think there are any contenders with Angela to the throne of best looking extreme metal vocalist that’s for certain!

This is a very well constructed album indeed. All the criteria have been met, from fast thrash style 80’s influenced tracks, to slower darker more gothic sounding songs, to epic metal ballads that would bring a tear to the eye of even the hardest of metalheads. The production is very smooth, more time and money has definitely been spent in this recording, and it shows with a very clean and rounded final product.

As usual with bands the caliber of Arch Enemy, the musicianship is top notch. The members have definitely outdone themselves on this one, taking the well known style and prowess of previous releases to a whole new level with "Wages of Sin". The drums are ultra tight and perfectly placed. Every hit is there when it’s needed, but unlike many drummers out there eager to show off their talents, the technical aspects have been used sparingly to keep the listener entwined. The guitars are brilliant, again keeping the technical tricks under wraps until they are most powerful and unleashing with an end result of a massive recording indeed.

Bottom Line: Even after listening to this CD for over a week now I’m still shocked and amazed at the abilities of Angela….this is something to own indeed.