Arch Enemy has been a leader of the Swedish metal scene since the beginning. With four great albums and a line-up to back it up, there is no question as to why the bands latest album "Wages of Sin" is getting as much attention as it is. The band is making its way over seas into North America this summer to promote the album, so I talked with lead singer Angela Gossow about not only the new album, her role as a singer, and the tour, but what she thinks about the band, the future, and the past. Read on! 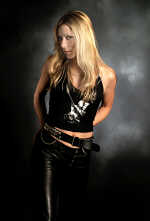 So you’re going on a North American tour! How did that come about?

Yeah we just got the offer, so we thought it was a good opportunity to burn down the States, so we just got on the tour.

What do you think about Nile? They don’t seem like a likely Arch Enemy tour companion.

No, but I mean it’s kind of interesting for the fans, you know? It’s not like three bands that all sound the same. It’s more of a various package. I mean, I think they are cool. I’m not so much for the music. This kind of death metal I don’t listen to so much, but I think it is an interesting package.

How do you think the Nile fans will react to the Arch Enemy show?

Well, we don’t really know. I hope they’re not totally intolerant or whatever, but I hope it’s good and we’ll see.

How is it being in the band now? Do they give you a hard time being the new member?

No, if they would I would of already left the band! No, they’re very, very nice. I mean, I’m not a new member anymore, I'm with the band since the end of 2000. We’re kind of a family now, anyway.

Do you feel intimidated taking on a male dominated role in a metal band?

Yeah, every female does in the metal scene, I think. I mean, I think every female feels the same about this. You know, you watch people and you have to be better than most males I guess, because people really get into detail and they really look on your fingers at what your doing, and they listen to what your saying, and you have to be careful with what you say, you know. Yeah, I think so.

Do you have much input as to how things go, or do you just handle the vocal duties? 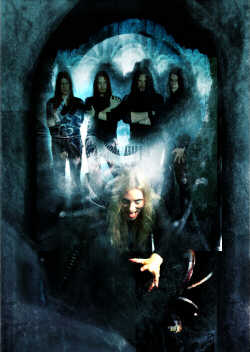 Being a woman, do you think that your looks will appeal to people, in turn selling more records or bringing more people to the band?

People wouldn’t buy a record because I’m a woman. I mean, they still have to like the music and still have to think the music is good. If somebody gets interested in Arch Enemy because they see a cover or a story with me and wouldn’t have checked out the music before, nothing is bad about this. So, I guess women are still very seldom or kind of rare in the metal scene anyway, so I guess this attracts people.

Don’t you think it’s possible that people will be turned to Arch Enemy for the wrong reasons then?

Then I would think that those people are stupid. What are the wrong reasons, you know? I don’t think that anybody is going to buy the record because they like my looks. People have to think about where to spend their money. There are so many metal releases every month. I would think twice before I buy a record because I like the looks of somebody in the band.

So what about the future of Arch Enemy? Can you or will you ever sing with a clean voice?

I could, I don’t know if I will, you know? If people want this or if they expect this, for the girl to start singing like a woman some day... maybe you'll have clean vocals in the next one, but maybe it won't be me doing the clean vocals.

Do you feel the need to try and win over the Arch Enemy fans that prefer Johan’s vocals?

No, I mean I really like Johan’s vocals too. It never works out to say you have to change your tastes now. Everybody has a right to have their own tastes. I don’t have a problem with somebody saying, "Yeah I like Johan’s and I also like you." This is ok, you know, music is a subjective thing. But I mean of course there are enough new and old fans that like Arch Enemy, so I don’t have a problem to leave some fans to Johan.[laughs] He wasn’t a bad vocalist.

In your opinion, what is the big difference between this album and the last one?

It sounds much more fresh and modern I think. It’s got a better sound anyway. A bit more like music for fans, not only music for musicians somehow. It’s not so extremely tricky, it’s more straightforward, more to the point, more aggressive.

What do you think differentiates Arch Enemy from the rest of the metal scene?

First of all, Arch Enemy are really good musicians. It’s not like mediocre or whatever, we really know what we’re doing on our instruments. And we have, being a death metal band, very rock and roll influences somehow. We are not twenty anymore, everybody sits around between 25 and 35 somehow. I’ve got some musical experience to bring into the band like different influences. We really think about it, we want to make a living out of the music so it’s really important to us that this is a good product. We not only deliver good music, we want to deliver for example, a good package too. We think about what we have to do on a stage, we have some kind of interesting stage show, and look nice. Practicing is a big concept in Arch Enemy. It’s not a hobby band. 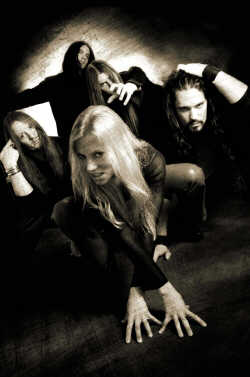 What elements, if any, are the band developing that will help make their sound grow?

That’s a good question (laughs). I’ve never though about this. I don’t know. I have to discuss this in the rehearsal room next time! I mean, everybody in the band has got their own style obviously. I mean you know, if you wouldn’t have Sharlee on bass, I guess our rhythm section would sound different somehow. Danny is a great drummer and he’s very young, very talented, and his brother is in Cradle of Filth. And the Amott brothers they have their own unique style, this kind of twin guitar stuff going on.

Yeah, I think Danny’s drumming is a lot better on this album than previously.

I think he has always been a very good drummer but maybe he didn’t have the space. Because if you pack the music full of tons of solos and tricky riffs then drums get lost somehow because you don’t have any space to shine through really. There is always the question, "Well what is dominating in the music?" you know? This time it’s a bit more equal. It's not like you have these hero guitar players so that everybody else is not important in the band. It’s a bit more balanced this time.

How do the members of Arch Enemy interact outside of the band?

Oh we are friends. We meet up and have a few drinks, and we talk. We’re just friends.

You were an Arch Enemy fan before you joined, I believe. What do you think about the new album compared to previous material?

I mean, I think every Arch Enemy album has its ups and down somehow. The great excellent songs on there, and there are not super killer songs. I really like "Black Earth", it’s some kind of raw death metal album, and I wasn’t so much into "Stigmata". I think they lost a bit. They got a bit lost in their own music. "Burning Bridges" was a kind mellow, but I really liked this too. I think every album of Arch Enemy has a special vibe or whatever. It’s not like if you have one album you have them all. It’s like every album has got its own unique style somehow. I’m not the one that says "Wages of Sin" is the best one, you know? I think every band cares about their latest release anyway, that it’s the best so far. It’s different, because there is a new vocalist and some kind of new music going on.

That’s all the questions I have for you. I would like to thank you for your time. Do you have any last comments?

We hope we get to rock America!