In the wake of the recent “mellowing out” of ‘Speed’ Strid’s main band Soilwork, many fans were starting to get worried that the thrash had been lost in our fellow Soilworker. Well those fans can indeed rest assure that this is certainly not the case as Terror2000 get ready to release their sophomore album. Harsher and faster than before, Terror2000 take you on a thrash ride you will never forget. I had a chance to speak with the singer/bassist Bjorn Strid about the new record and possible future plans for the project. Read on...

First of all I would like to ask you how does it feel to be releasing a new Terror2000 record? I know for a while many people might have been thinking that you had softened up or something.

Well I guess Terror2000 is like a substitute for Soilwork. A way to get all the thrash stuff out of your head. The album is even faster than before. It’s even got more retro thrash influence like Kreator, Sodom, Slayer and stuff like that. So it’s a hell of a fast album with a lot of ripping riffs...

So a nice balancing act with the more melodic direction that Soilwork has taken...

With each Terror2000 member dedicated to his respectful project, how difficult was it to get everybody back to do another record?

Well I guess it was pretty much the label that pushed us. (In a label exec. accent:) “Hey guys you gotta record another album.” and we went “Oh!” cause we had not thought of Terror2000 in a long time. We started to go down to the rehearsal room to see what we got with the riffs and stuff and try to pull songs together. I think it worked out pretty good cause we had received such an amazing response on the first one so we decided to do another one. I guess we wanted to be even faster than we were on the debut.

Doing new Soilwork and Terror2000 around the same time, did you have a moment where you just had the give the chords a rest for a couple days. I hear Devin worked you really hard on the new Soilwork album.

Yea that was very tough being in the studio with Devin I’ll tell you. Oh man! He pushed us to the very limit. I think we recorded the vocals for like 12 or 13 days and that’s like 5 days when my voice was totally fucked up and I couldn’t sing. I couldn’t sing a tone so I had to rest for like three days or something.

Did you do Terror2000 before or after you recorded the Soilwork one?

After... directly after actually because the day that I got the master of the Soilwork recording, we started to record the Terror2000 album. So that was a pretty tough time. Maybe it was a little too much I guess...

Well your new record is called "Faster Disaster". What would you say you went about differently when writing the music on this one as opposed to your debut?

Well I guess we wanted the album to be even more retro cause that was the whole idea for the first one. but it went out pretty 90s thrash I guess. It was pretty much At The Gates II, but when we started to write new material we wanted it to be more retro while putting a little bit more heavy metal into it, but keeping it very fast. I guess that was the thoughts about writing the new material. The previous one was pretty technical and it is still technical but more straight forward. 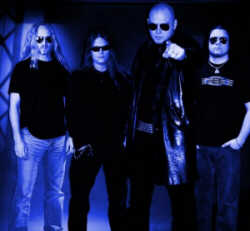 The artwork is incredible! Who came up with the idea for the cover art?

Well I guess I had some ideas to make a very ironic cover with racing stuff. You know... with the racing flag and all that stuff and I think it was me and Carlos sitting at his place drinking some Vodka trying to figure out a cool cover. The motorcycle was supposed to be the original cover, but this one is even better with the skeleton holding the flag and some burning tires on the back and I think racing is very suitable for thrash music. The lyrics are ironic with lots of mumbo jumbo stuff so it’s pretty cool.

So Nuclear Blast is releasing the record June 25th in the states. Did the fact that Soilwork is on the same label help to get this deal together?

Well I guess it started when we went to the Milwaukee Metal festival last year and I talked to Phillip about it from Nuclear Blast. He had heard the first album and liked it very much and we talked about it and he said that I should send the next album to him to check it out. I sent it to him and he liked it very much and they really wanted to put it out in the states so that’s how the deal came through.

Do you ever see you guys doing any touring as Terror2000 or do you think it is best to be left as a studio project?

I think we’re keeping it as a studio project because there isn’t too much time to tour with Terror2000 because of...

Yea exactly and I work part time and I have a girlfriend so I guess we will have to keep it as a studio project. It would be cool to do some gigs but I guess it is impossible. There is a pretty tough schedule for Soilwork this year.

I am curious to hear about some of the guests you have on the new album. Peter from Soilwork was telling me it was almost like Terror2000 with friends. Did this help to fuel a carefree and fun environment while in the studio?

Yea that was very cool to invite some friends into the studio for some guest solos and some guest vocals too. That was a pretty cool thing to do. As you probably know, Peter has a guest solo on the track 'I Am Speed At Night' and then we had Christofer of Darkane with a guest guitar solo on I think it was 'Back With Attack'. Henrik from The Defaced did some guest vocals on one of the tracks so there was a lot of people in the studio and when we had the listening session for the new Soilwork, all the journalists did some gang vocals in one of the songs. I guess there were like 30 people doing gang vocals so that was very cool.

What would you say was the main inspiration for some of these lyrics?

[laughs] I guess the main inspiration is alcohol... alcohol, racing... you know all that stuff... death and destruction... all that thrash is about. Those would definitely be key words for this album.

Do you see yourselves doing another record further down the road?

Well that’s hard to say. I guess we will busy with Soilwork for the next two years I hope. Hopefully we will get to tour a lot more. We will see in the future but there are no plans yet. We will see how the album goes and if we find any inspiration to make another album. 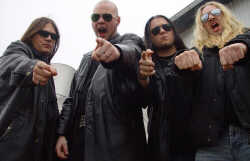 This year Megadeth, who were one of the leaders of the American thrash movement along with the now country trio Metallica, have announced their breakup. Has events like this along with the deaths of Chuck from Death and Paul Baloff from Exodus effected you as a metal fan in general?

Oh it is so terrible to hear all this stuff. There are a lot of metalheads who are dying. And I don’t know why there are a lot of singers dying. I hope it’s not all about the screaming vocals. That’s very sad to hear because Chuck was a great singer and a great guitarist too of course. I hope I will never get cancer...

What are some of the bands you are into right now and what are some you just would like to go away!?

I do not listen a lot to the new metal records at the moment. I am pretty much listening to old AC/DC vinyls like "High Voltage" and stuff like that. I still like the Opeth album. I listen to that album a lot and also the Dimmu Borgir album...

Hell yea... it is really fast and whenever I listen to it I feel like jumping into the walls and stuff!

Exactly, that is the same with me.

With bands like Dew-Scented, The Crown, and Carnal Forge gaining a massive underground following, do you feel thrash is making a comeback within the extreme metal community?

Well that is hard to say. Melodic metal seems to be very popular at the moment but I guess the thrash scene is growing. I have heard that Carnal Forge have received a lot of good response for their latest album and hopefully there will be a growing thrash scene like the one at the end of the 80s. That would be cool.

Well that is all I have for you now Speed. Any final words you would like to share with the Terror2000 fans reading this?

Well just check out the album cause it is even faster than before. That’s a good reason to buy it I guess (laughs). It is hard to say if we are doing any shows. I do not think so, but check out the album and I hope there will be a lot of Terror fans at the Soilwork shows so we can grab a few beers!