Germany’s pure metal powerhouse Primal Fear were forged by four well-known individuals in the scene including Mat Sinner, founder and songwriter of popular 80’s band Sinner, and Ralf Scheepers, the robust singer for Gamma Ray. Their unrelenting metal attitude and oldschool approach has made them the kings of metal in their own country and if they keep it up the world will follow. Their latest album “Black Sun” has been compared to Judas Priest classics like “Painkiller” and I’ll be the first to admit this band is the true successor to the Metal Gods! This is modern Priest mixed with classic Iron Maiden! Excited? Let’s hear from Mr. Sinner himself. 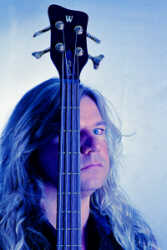 A congratulations, first of all, on the brilliant album "Black Sun"! Tell me, what has the reaction been like so far around the world?

It’s been really good all over the world so far, it came out just Monday in Europe, last Wednesday in Japan and Korea and the response from fans and magazines has been great! It’s on Germany’s Top 40 charts... so it looks good for us!

Can we expect a tour anytime soon?

We will start with Russia in June and we’ll be all around Europe in September and October. After that we’re heading to South America and perhaps the U.S and Canada... and Japan is calling too, so... we’ve got a lot to do!

The whole world, essentially! Now how did the plan to go to Russia come about? Not a lot of bands tour the country, what is the scene like in eastern Europe?

Well Nuclear Blast has a good distribution deal there and so they invited us. Russia was mainly a land of bootlegging so far, but now they [NB] have an official distribution plan there and they’re doing a lot for us. We have a lot of fans out in Moscow, so that will definitely be a big show for us!

The closest bands Primal Fear can be compared to are modern Judas Priest, and Halford. How much of an influence are these bands?

For me, at least (laughs). I mean, everybody else in the band is into them and we are seen as a band that is very influenced by Judas Priest, because I think the guitar riffs are similar, and Ralf [Scheeper]’s vocals are very similar to Rob [Halford]’s, but if we do have a strong Priest influence it would be from albums like “Screaming for Vengeance”, or “Defenders of the Faith”, and of course “Painkiller”, but not the new material.

What do you think about bands like that, Priest and Maiden, still cranking out pure metal after so many years!? Do you think the energy and power is still there, or are they getting old?

Yes it’s good, why not? There’s a lot of new bands arriving on the scene so the music is still very alive, and the old, quality bands can still survive and they’re doing a great job.

Do you think all the energy and power is still there?

Yeah, of course! They can still put on a great show, I saw them [Iron Maiden] about a year ago and it was great.

Do you think you could do it for another, say ten, fifteen years with Primal Fear?

Wow! We’ll see! I mean, it depends on whether it’s still fun for us or not, that’s all. 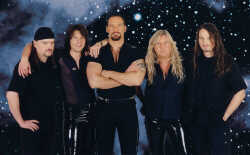 OK, let’s talk about Sinner, after almost 20 years of running that band, you‘ve built up quite a reputation and fan base in Europe. With Primal Fear, does it feel like you’re starting all over again, from the bottom?

No, that’s the great thing! With Primal Fear it was a lot easier: it was well accepted and well reviewed from the first day and we started on a very big label right from the start. There was no playing small clubs or anything like that, the reaction in Europe was very good from the first day, so we were never really newcomers like Sinner. When Primal Fear came out on stage it was, like, everybody wants to see it, you know?

Are you still gonna keep going with Sinner, or have you made a complete switch?

We’ve had a lot of talk about that. For the last few months I’ve had to focus totally on the new Primal Fear album but I think there is some songwriting coming up in the summertime for Sinner. I’ve been getting calls from the old line-up and they’re definitely interested. So we’ll see, perhaps we’ll have a new album out by next summer!

Sounds good. Do you keep in touch with today’s huge underground metal scene? What are you favorite bands as of today?

Yeah of course, we listen to a lot of bands, I mean we have a lot of support bands from Europe for our shows and we’re really into the kind of stuff they’re doing. It is just impossible to pick out any in particular ones though, there is just so much going on. The scene is very big.

I agree, it just keeps growing; 2000 and 2001 have been very groundbreaking and productive years for underground metal, the strongest in a long time. Do you think real metal is slowly returning into the mainstream world once again?

It depends on a lot of things and not only on the number of fans. There is a lot of them, certainly, we saw the turnout last year in the U.S. was great and the people, they knew our songs and all that. But it also depends on the media. A lot of them want to ignore traditional heavy metal, or other types of really heavy metal and give it very little exposure, so that is what makes it difficult for us.

How do you like playing in the U.S., as opposed to Europe?

Well Europe is home for us and we can basically play our whole show with the pyrotechnics and everything there. Now flying over to North America all we’ve got is our guitars and that’s it, you know? So the show is kind of stripped-down, but in the end if the band is in a good mood and the audience is enjoying the show then it can be something really special.
We did a festival last year there and all the fans that were used to their American bands saw us as some kind of strange and “exotic” band from Europe or something (laughs), the crowd was really loud, I mean, they gave us a great time and we enjoyed playing there. 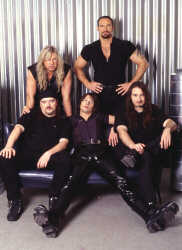 Now how do you feel about Napster and all the internet pirating going on? Is it a positive thing, or negative?

It’s negative, of course. I mean, people will download a whole album for nothing so how can a musician even exist? For us it’s all work, songwriting, lyrics, producing, it goes on for months and months and then two weeks before the album even comes out you can download it on like Audio Galaxy or something. And I think this will eventually destroy the music. The people who always use this should think about what they’re doing to the musicians they like. If we were selling millions of albums and were rich I wouldn’t give a shit, you know? But a lot of people and musicians in Europe really believe in what they’re doing and they’re not rich off their music. So they’re working really, really hard and if their music is downloaded for free it will destroy their career.

Tell me, what was it like working in the little-known Sonic Ranch studio in Texas? Why did you choose to do the mixing there, it is basically in the middle of the desert!

Yeah it was kinda weird but very nice, we decided to go there for complete peace of mind and total focus on the album without any outside distractions. No cars breaking down, no lawyers, tax people, girlfriends or any of that (laughs), so we got to really focus on the album and it was a great time for us.

I understand you contributed vocals on a few songs like 'Mind Machine'. Is this something we can expect to hear more of later on?

We’ll see. I do a lot of backing vocals anyway so it was not new to me or Ralf either. We share vocals all the time on stage and it was his idea to put it on the album. Normally I’m coming more from a rock side, I’m more of a rock singer than metal singer so I don’t contribute as much.

My favorite song from Black Sun is definitely 'Mind Machine', do you have a favorite?

Lots! (laughs) Well, working on the album for such a long time and working on every single detail it becomes very hard to choose. 'Armaggedon', 'Lightyears From Home', 'Mind Machine', 'Fear', 'Controlled'... they’re all like babies to me.

How does the songwriting process happen? Do you write all the music or does everyone contribute?

Well the good thing with Primal Fear that helps us keep the pace with album releases is that every guy in the band has a small recording studio at home where we record all our ideas and bring it all together in the practice room where we work together on the material. We’re a very creative team and we generally have a lot of fun in the creating process! 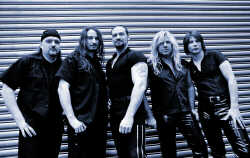 Can we expect the sound and musical direction of Primal Fear to change over the next few albums?

I don’t think so, no, it’s just that we know the basic idea already for the next album and we will prepare it well because it’s a long way down the road, and we just released this one! It will definitely be a variation of the sound but it will still be very much Primal Fear.

It’s certainly good to hear bands that still have so much commitment.

The good thing about European fans is that they’re very committed, and we have a very strong fan base here, and I think that maybe it’s easier for us than some of the American bands who are trying to change their sound to always be modern. So there is no real need for Primal Fear to go on the modern side, a lot of new bands that are popular now like, say, Puddle of Mud, are nothing new for me because I’ve heard their sound before and they are just following trends. With traditional metal, it never changes, so I could be doing this five years earlier or five years down the road and still be successful.

That’s right. Well some things never change, and this style of metal certainly wouldn’t be called traditional if it did.

Well, thank you for your time Mat, any closing remarks?

Thank you very much for the interview, and I hope to see you sometime when we tour!