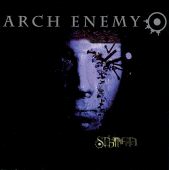 This legendary Swedish melodic death metal act needn't an introduction, especially since they're well established and have been for over 16 years. The lineup on this release features Johan Liiva on vocals, Michael Amott on guitars, Christopher Amott on guitars, Martin Bengtsson on bass, and Daniel Erlandsson on drums.

There is no intro just tremolo picked guitar riffs that give you the overall dark feel of the release. This album is filled with melodic overtures, B-tuned thick guitars, and Johan's distinctive low throat. The guitar riffs are entirely unique, imaginative, creative, melodic and quite memorable and I believe it to be the band's best output in their entire discography. It's too bad Johan isn't still on vocals.

The music is what's the most enduring. There's a combination of sweet distinct songs on this original sounding overall release. It features the band's unbelievably awesome writing capabilities. Songs such as "Beast of Man", "Dark of the Sun" and "Bridge of Destiny" feature such great catchy guitar bits. Christopher dominates on lead, while Michael overuses that wah-pedal. It would be ideal if Michael was solely on rhythm guitar. Christopher is way more technical than his brother on lead, but Michael still has some good melodic solos that compliment the album. That chunky guitar is what is most admirable. The bass guitar was hard to hear. It was barely audible during the entire album. That is where I think is the weakest point is on the album. Everything else blends well in it's entirety. Nothing else lagging behind except the bass.

This is an album where you can't really get sick of because it's simply intoxicating, especially if you're a melodic death freak like me. The leads, rhythms, vocals, and drums are perfectly executed without much discretion. There is nothing not to like here since the melodies shine so well here. Without a doubt, Stigmata reigns in its' entirety and remains to be the most ideal melodic death metal release that Arch Enemy has ever put out!

Everyone knows that Black Earth was the kind of debut any band would kill for. For Arch Enemy, this meant that they had the dreaded task of producing a follow-up to such a album that could equal it or even surpass it. With this album; however, it is difficult to say what they have done exactly since it is a bit different from the Arch Enemy we heard from before. Sure the overall sound is the same, yet the band has gotten to writing more complex material this time around. For most of the songs it works to their advantage; however, several suffer from monotony. The Amott brothers do an excellent job on this album as they did with Black Earth, and this time drummer Daniel Erlandsson only plays on one track, the Godlike Beast of Man, while drum machine, Peter Wildoer, plays on the rest of the songs. This stylistic change in drummers also serves as a change for the band's sound as well. Another minor change, if you will, are Johan's vocals which are not exactly up to par with his delivery on Black Earth, but still have the ability to send chills down anyone's spine. Even though it is a stylistic departure from their debut, this is still the same Arch Enemy we know and love and they still kick ass!

Bottom Line: If you are look for complex and technical melodic death metal from Sweden, then this is your kind of cd!