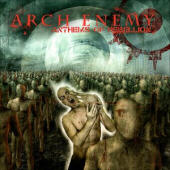 When I first listened to Arch Enemy's fifth album, "Anthems of Rebellion," I had no idea what a challenge of a review I was in for. Part of me still wonders what this music would have sounded like with original singer Johan Liiva at the microphone. There is also the intriguing division in the band's fan base that has occurred as a result of this album. To my ears I hear little evidence of a selling out of any kind. This is Arch Enemy in its most brutal and punishing form.

The new Arch Enemy era began with last year's "Wages of Sin" which introduced new vocalist Angela Gossow to the fold. Musically, they took everything they were about and polished it off with a top of the line production job. Unfortunately, my initial excitement for the album vanished after a month or two. For some reason the album seemed dry and soulless to me. After being absolutely floored by the emotional intensity of vocalist Johan Liiva on the band's third album, "Burning Bridges," I longed for that same power on "Wages of Sin." "Anthems of Rebellion" doesn't feel anymore inspired to me than the previous record. The music is brutal and melodic, everything Arch Enemy always has been, but it feels empty to me.

Sound-wise, Arch Enemy offers another quality performance. Drummer Daniel Erlandsson is one of the most talented players in the metal arena today and puts on an extremely tight performance as always. The Amott brothers haven't changed either for the most part. Undoubtedly, many fans will be angered by some of the solos being fairly shorter than they have been in the past. The thrash number, 'Despicable Heroes,' even goes as far as replacing a solo with a breakdown. The Korn-styled riff in 'Instinct' is bound to raise some eyebrows as well.

On "Anthems of Rebellion" vocalist Angela Gossow turns out another spine-tingling performance. She is obviously more comfortable in her role as front woman. Personally I still prefer Johan's emotionally charged roars over the snarls of Gossow. I also think a great deal of the lyrics could have been revised. Some of them are pretty funny and I am not sure if that was intentional or not, but I will lean more towards the latter.

Musically, it feels like I have heard a lot of this album already but they perform with such conviction that it is hard to fault them. The band can still churn out some excellent melodic moments here and there. What is obvious after listening to this record, at least for me, is that this sounds like a band going through some intense growing pains. This album also introduces clean vocals into the mix. The irony of Chris singing over Angela's morbid screams is a clever one, however, what confuses me is the fact that they appear in two consecutive songs instead of being spread out on the record. This leads to a sense of a lack in direction in the record overall. Is this record trying to tell us something, and if so then what? I ask these questions because I feel that I have to. It will be interesting to see where they take the band from here.

Overall, the record is good, not great, but good. I keep feeling that Arch Enemy are on the verge of true metal greatness but nearly miss the mark every time. Part of me is still reeling from the loss of original singer Johan Liiva, but Arch Enemy is moving on. If you enjoyed "Wages of Sin," then I am almost certain that you will enjoy this one as well. If you thought that the previous record lost its magic over time like I did, then it might be best for you to give the new one a test drive before taking it out on the road.

Bottom Line: This is still Arch Enemy. If you dug the last one, then you will have little to no problem getting into this one too.