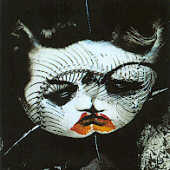 This is Arch Enemy's debut CD featuring the Amotts (Christopher and Michael) on guitars, bass guitar was also done on here by Michael until they found a replacement following this release, Daniel Erlandsson is on drums and former Johan Liiva on throat. Let me tell you that for a debut CD, there are many classic tracks on here. Michael is the force behind the riff writing with his brother contributed more so on the leads than on the rhythms. His leads are more technical than his brothers, whereas Michael's melodies/leads are more "feeling" based.

There is no intro exhibited here, just the slam of a snare beat then enter the band with vigor. From my standpoint, this debut could've been stronger if vocalist Johan had a little more variety to his bellowing throat outputs. There isn’t too much variation exhibited on here from him, but his vocals don't drown out the melodic riffs. He just needed to have more feeling put into them. They were quite boring. I'd have to say that some of my favorite melodic tracks are on here are plentiful primarily because its melodic death metal is my favorite genre, of which Arch Enemy plays dominates in.

The music features B-tuned guitars, which are thick and heavy throughout this whole CD. There are many tremolo picked rhythms as well as many melodic parts, especially during the chorus sections. They give the debut more augmentation to this aggressive main guitar riff-writing. The tempos vary. There are faster parts, more groove laden licks and slower chorus style writings. They keep the listener captivated with this writing ingenuity. In addition, there is an acoustic instrumental called "Time Capsule" and also a heavier one entitled "Demoniality."

As I mentioned previously, there are some great lead guitar work by Christopher Amott. Just listen to the outro solo on "Fields Of Desolation" and you'll hear what I'm talking about. Christopher's leads are way more filled with arpeggios and speed picking than his brother Michaels. Michael has more emotion involved in his lead guitar work. He likes to use the wah-pedal exclusively on his solos. Michael was more technical when he was playing for Carcass, quite noteablely on their "Heartwork" release.

The production is solid, though the bass guitar is difficult to hear. All of the rest of the band member's main guitars, drums and vocals are well heard. The mixing was well done nevertheless, and the guitars are what stands out the most here. Most tracks reflected how talented this band is. But getting rid of Johan was not a good move, even though his vocals here are more death metal oriented. This isn't the case on future releases when he was still with the band.

On the import CD of this release, there are some bonus tracks featuring Iron Maiden cover songs. Strange to hear them in B-tuning with Johan on vocals. Songs to check out here are "Bury Me An Angel", "Eureka" and "Fields Of Desolation." If you're a big fan of melodic death metal, then you should check this CD out. It’s what melodic death metal is totally about. You'll hear what I'm talking about if you decide to purchase the album.

In 1996 Sweden was overflowing with enormous amounts of talent in extreme metal. Bands like In Flames, Dark Tranquility, and Soilwork rose out of the ashes of the legendary act At The Gates to form a fresh melodic metal sound. However, none groomed louder and heavier than Arch Enemy. With their debut album Black Earth, the band proved they had what it took to hang with Sweden’s elite. Raw in its production and completely ruthless in its attack, Black Earth remains an underground classic in the melodic death metal genre.

As with every Arch Enemy release, the musicianship is top notch. Daniel Erlandsson absolutely destroys his drum kit. Vocalist Johan Liiva, who also plays bass on the disc, screams with a massive amount of fury and intensity. Many people shun on Johan’s vocals, yet I believe that they match the music perfectly. The guitar work on the record is superb. Michael and Chris Amott grind on the axe with skill and power. A great example of their abilities lies in the solo of the song Cosmic Retribution. The Latin influenced acoustic section is utterly breathtaking.

The record consists of two short instrumentals. One of them is electric and the other is acoustic. They are just small places to catch your breath amidst the brutality found elsewhere. Standout tracks include Bury Me An Angel, the previously mentioned Cosmic Retribution, and the final track Fields of Desolation, which the band attempted to recreate three years later with bland results.

The production on Black Earth is incredibly raw and brutal. Despite the primitive sound, this is still a Studio Fredman production. It seems everything that maniac Fredrick touches turns into pure metal gold and this is no exception. Every instrument comes out unbelievably heavy, yet it is very easy to take in and digest. The guitar and drum sounds are amazing, and the vocals are not as loud as they are on the vocally controversial Stigmata record.

Looking back, it is obvious why this cd continues to remain a fan favorite. It still manages to hold its own against pretty much any release coming out nowadays. Its perfect blend of brutality and melody has been something many bands have been trying to accomplish for years, but never been able to truly succeed at. The only thing I dislike about this record is that it is a little too short, but what it lacks in quantity, it more than makes up for in quality. I would recommend this to all melodic death metal fans and fans of the band especially. No Arch Enemy fan can be without Black Earth.

Bottom Line: This is a classic debut from a great heavy metal band. Do yourself a favor and pick this up immediately.