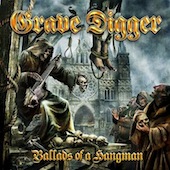 Type: Full-Length
Release Date: January 9th, 2009
Label: Napalm Records
Genre: Heavy, Power
1 The Gallows Pole
2 Ballad Of A Hangman
3 Hell Of Disillusion
4 Sorrow Of The Dead
5 Grave Of The Addicted
6 Lonely The Innocence Dies
7 Into The War
8 The Shadow Of Your Soul
9 Funeral For A Fallen Angel
10 Stormrider
11 Pray
MetalBite on YouTube

I have received a tape with an original dialogue from the rehearsal room of Grave Digger. Somebody says, "we have three new melodies", another guy adds "and five interesting riffs". A third voice, probably that of drummer Stefan Arnold, proudly proclaims "I still can manage the four-four-time". Finally, I guess it is Chris Boltendahl who makes the crucial statement: "Is this really true? Then come on guys, that's enough for a new album!".

Indeed, many Grave Digger albums consist of a mix of very exciting tunes and a couple of ill-defined, listlessly performed tracks. And I am sure that the guys know this dilemma, but they are not willing (or not able) to change it. I am sure, because in most cases, they start with the very good tracks while the second half of their works often drowns in mediocrity. Ballads of a Hangman begins to dilapidate as soon as the ballad "Lonely the Innocence Dies" sets in. A duet of a female singer and Chris makes me sick and the kitschy lyrics ("I'm so afraid I could lose your love") match with the oh so impassioned harmonies. The short solo part throws a little metallic confetti, but this cannot hide the fact that the song is the absolute nadir of the album. The weakness of this song reflects another predicament of the group: either they follow their "more of the same" ideology again and again or their commercially orientated experiments like "Lonely..." go wrong.

At the other end of the scale, one finds the catchy, stirring and swift title track. It combines the almost solemn melody of the chorus with a profound heaviness and proves evidence that the book of traditional metal is not yet completely written. Boltendahl's scream at the beginning shows his competent side and the riffing delivers the necessary currishness as well. In addition, the "Hangman! Hangman!" staccato does not fall short of effect. The only miserable detail is the official video of the song which delivers one of the most stupid clichés of heavy metal: violence against (young) women. So just use your ears to consume this track - and by the way, this is almost always the best choice in order to get in touch with good music.

As mentioned before, Grave Digger have more to offer than only one good riff per album. "Hell of Disillusion" hails with broad riffing and its solid verses, the pressing bridge and the memorable chorus form a strong unit. More or less the same goes for "Grave of the Addicted" with its clearly defined main riff (and all these songs are part of the first half of the album). By the way, it is a pretty well produced album. Grave Digger are no newbies, Ballads of a Hangman was the tenth long player after the re-union. Drums and guitars are powerfully mixed, Boltendahl's voice is neither dominant nor sidelined and only the bass guitar falls by the wayside. Well, we know this situation very well... But we did not know that Grave Digger still have an ace up their sleeve at the end of the record. "Pray" boasts with an outstanding, extremely catchy chorus and therefore we should not talk about the fact that the verses are stolen from a very well-known yet totally shitty German pop punk band (I will not mention its name, I have better things to do!). Nevertheless, Grave Digger stick to their guns: the remaining 65%-songs between "Lonely..." and "Pray" are neither hot nor cold and their main function is to fill the album in a fairly acceptable way. The catchy chorus of "The Shadow of Your Soul" marks the highlight in this context. Be that as it may, do you want to know another quote from the rehearsal room tape? "There will be enough freaks that will buy the album as long as our name is printed on the cover - no matter whether it is good or bad". I agree.