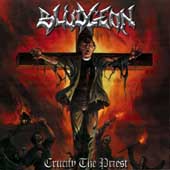 Lately, the death metal scene has been highly over saturated with bands that play some boring, similar, and just plain predictable music. Every once in awhile a band comes along that just hits the metal scene hard and throws a bit of diversity into the scene instead of playing what everybody else is playing. Sorry, but Bludgeon are not one of those bands.

Sure, the band members can play their instruments, have a few nice or maybe great riffs here or there, but that’s about it. For those moments that do grasp the listener, there aren’t enough of them to keep the album entertaining. The guitars are just boring! They are cliché and don’t hold an ounce of individualism. The drummer is probably the strongest link in the band, but really doesn’t do much to take back my attention. And the singer... well, he does death vocals. I must say that in the whole spectrum of death vocalists, he’s not anywhere near the top. He really just doesn’t have any range at all. As an overall a band the songs just don’t have any shape to them and run into each other, creating what is ultimately a boring and repetitive record.

For their somewhat old school death metal style, it just doesn’t cut it. They borrow too much from other bands that played this same style. They try to spice up their somewhat simplistic approach on death metal with a few modern elements, but it certainly seems a bit forced. “Crucify The Priest” serves the purpose of being aggressive death, but it’s too bland.

Bottom Line: If you like your death metal boring and unoriginal, run to your nearest store and get a copy of this. You wouldn’t want to miss it.