While being in the underground for almost 10 years and releasing 4 demos, Chicago’s Bludgeon finally sparked the interest of Brian Slagel (Metal Blade Records) and recorded their first full-length called "Crucify the Priest". Contrary to the album’s title Bludgeon doesn’t consider themselves as a satanic band and their version of speed/death metal is based on old school formulas grounded on their favorite bands they grew up listening to. With high expectations of their future, Matt ‘Chewy’ Dezynski (drums) and Mark Duca (vocals/rhythm guitar) introduce us to the band that lives and breathes music 24/7.

Since this is your first record, tell me the Bludgeon history, how did it all start?

We formed the band in 91-92 and since then the only change in the lineup is our new guitar player, but besides that it’s basically this same lineup, we all live together in the same house. After we’ve put out our fourth demo, first on CD, we released that and Rebel Radio was playing a couple of songs on it and that’s how Joey had heard us. He called us, came down to our house and we played him a couple of songs, cause we practice right here in our house, and after hearing the songs he was like "Man, I think we could talk some business here because people need to hear you guys". So, next thing you know we signed the deal and recorded our first full-length CD.

Where did the idea of Bludgeon come from and why this type of music and not, say heavy or power metal?

Pretty much it’s along the style of music we listen to. I mean, we listen to a lot of different styles of music but mainly we listen to speed metal, death metal… I mean, I’m not too sure how people are going to label our style but pretty much we’ve been playing this same style since we’ve started and we just feel comfortable playing with. Although a lot of bands have stopped doing it since we’ve started but this is what we like doing and this is what we’re going to do. We’re not going to sell out or play something different just to get some radio play.

After listening to "Crucify the Priest" my first impression was that you went for an old-school death metal formula. Was it intentional? Did you just want to play the music you grew up on?

That’s the style of music we started playing and it seems like it’s has taken us a while to get it out. We’ve been doing this the whole time it’s just taken so long for us to get out it seems a little outdated now but that’s why we’re trying to throw in the heavy parts in there just to stay more modern. We’ve been doing a little bit of changes just to stick with the times but mainly we are speed metal band. 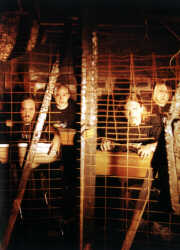 Who’s the main songwriter in Bludgeon and how does the composing process work in your band?

Mark, our singer, he pretty much writes all the lyrics but as far as the songs go… no one ever comes to the practice and says ‘Oh, I have this song finished’ and everyone sits down and listens how it goes. We’ve just been sitting around, like I said we all live here, that’s where we practice, so someone will be just messing around on the guitar or bass or I’ll be back there beating on the drums and someone will hear something that catches him will say ‘OK, play that again’. We pretty much go with everything… of course not everything is kept. There is a lot of songs where we complete the whole 4 minute song, I mean not on the spot it would take us a week to get it all together, and after a listening to the whole thing we’re like ‘it’s not something we’re going to do’ and we drop it.

Do you want to send some kind of a message with the title of your album?

Not really. The lyrics and stuff pretty much just go with that style of the music and we’re not trying to put on any image like a… not that we have something against Deicide but Deicide puts on real antireligious thing and we are not out to do that at all. It’s just the name of one of our songs and we though it does grab people’s attention so it couldn’t hurt to name the album that. We had mentioned it to Ken Kelly, the artist who did the cover, and within couple hours he had a sketch that we really liked so we figured you know, just go with the good thing.

So, when Mark writes the lyrics do they reflect the band’s view or they are there just to fit the music?

It has a lot to do with the music but a lot of this stuff touches base with him personally too and he would actually be the best person to answer that… He’s actually in the room, hang on one second…

Hi Mark, I just have a few questions about your lyrics… Where do the inspirations come from, do they reflect your personal views or do you write them just to fit the music?

Hi Chris. Well, the lyrics come from a lot of different places. It could be a dream I might’ve had, the trip I’ve taken, maybe something inspired me to write in the movie I’ve seen you know, just anything. Sometimes I let the songs speak to me.

But as I was talking to Matt, it seems that maybe you are not really an antireligious band with exception to the title of the album and few other lyrics?

You have to read between the lines on that one. It doesn’t literally mean to go and crucify the priest, it’s just telling you to look and see a little bit deeper. There’re some priest out there that are using the collar maybe just to manipulate people. There’s a lot of stuff going on in today’s society you just read between the lines and don’t take everything just from what they tell you.

Do you have any goals that you want to achieve with Bludgeon or right now is it just about having fun and doing what you love to do?

We want to just go out there and play as many shows as we can. Make as many records as we can and our goal? Like any other band to maybe someday be like Ozzy or Zeppelin or something that’s going to be there that 30-40 years from now somebody is going to say ‘Yeah man, these guys fucking still kick ass!’ 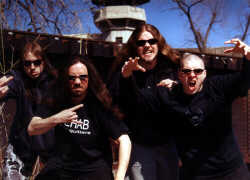 You’re starting on pretty high note anyway… you are going to open a few shows for Manowar. How did that happen? Many bands would kill for opportunity like that…

Yeah, they are a great band. They’re loud! They put on a great show I mean, it’s almost like when you go to the airport and you look at the plane and see the air behind it because of the heat that’s how you can almost see the sound. It’s so loud you can just feel it in your chest inside! It feels like someone is just begging you!

How did you end up on Metal Blade Records? Was it one day out of nowhere that they showed up at your door?

No, Joey set it up. He called us and said 'I’m bringing Brian Slagel over, we’re going to be there and I want you guys to jam a little’. Next thing you know there is Brian Slagel in our living room. We sat down, we jammed a little, had couple of beers and said let’s make a record. He really liked our music and that’s why we wanted to go with them because we want to work with someone who likes the music for what it is and doesn’t want to change it. Like in a lot of bigger labels, they’d say we like the way the band sounds but I want you to sing like this… We don’t want that. We are who we are and if you don’t like it then…

Your bio says you didn’t want to go to a professional studio because you wanted to sound more brutal and you decided to record everything at home. Who came up with this idea?

Joey suggested that we could capture the band right here in our living room. That it would be almost like sitting here with us checking it out. He thought that it was the way that the people needed to hear the band and we said ‘let’s try it.’ We never did anything like that, every time we did a demo we’ve always gone to the studio and that was something new for us. I think it really worked out good for us.