Scholomance have been around for a few years but are only now becoming a bit more widely recognized. With their new album, "The Immorality Murder", the band has once again pushed their limits and they are becoming a better band. Guitarist Scott Crinklaw and I discussed the band, the music scene, and the future. 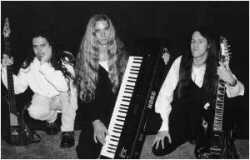 First I would like to say thanks for giving me the time for this interview.

Thanks for featuring us!

For people unacquainted with your music, could you describe your music and tell us a little bit about the bands history?

Our music is hard to put a label on. It has elements of classical, progressive, death, black metal, and some weirder influences too. It's very technical, built in layers, and each instrument is usually doing something entirely different from the others. Maybe the closest comparison you could make would be Arcturus mixed with Meshuggah or something along those lines. Our lyrics are also quite complex and usually tell an ongoing story. The music should appeal to those who like more intellect in their metal and is designed to not just be an easy listen. We began in 1996 or so, and we continue to hold true to our original wish to create challenging metal. The CDs we have released are "A Treatise On Love", and our latest, "The Immortality Murder" double CD.

Why do you think it was your new album, "The Immortality Murder", that the band has become more widely recognized instead of with your previous album, "A Treatise On Love"?

I don't know. Are we more widely recognized now? It feels about the same to me. If we are indeed more recognized I'd attribute it to the better sound quality and packaging on the new CD. Plus having a double CD doesn't hurt either. I still think the first CD is very good, but the recording quality sucked. It had some excellent songs but most people aren't willing to check them out because it's not an expensive sounding production. If I could, I'd definitely re-record some of those songs. The new songs are much heavier overall and certainly more thought out in the classical sense. There's a lot more piano on the new CD and I think that appeals to people because we approached it in a very heavy sense. It wasn't the usual major keyed neoclassical stuff that people are used to. We feel that our music is also original and something different within the metal scene and I hope that is one of the biggest factors that draws people to us.

Yeah, we've been with them from the start. Working with Andreas has always been pretty easy. It doesn't really feel like a label/business situation at all since I've been in touch with him for so long now. Lately the label has grown immensely so some things have changed a bit - some better, some worse. I'm pleased to now share the label with Arcturus, Green Carnation, and Winds. I have a lot of respect for the musicians in those bands and it is nice to have something in common with your label mates.

For a unique band like Scholomance, what is it that influences you and your band mates to create something so unique or become an experienced musician?

I don't understand why anyone would not want to be unique. There is no reason to simply blend in or follow the lead of another, in music or in life. Ultimate satisfaction is in creating something of your very own. If you also desire success outside of yourself, you must stand above the rest in what ways that you're able. In music, we feel you should never stagnate and settle for less than the best you're capable of. Always improve. Always progress. Results come with trial and difficulty and there is no reason to fear improving your abilities. Ability and experience are two different things. Experience comes with time and will come about naturally. It really cannot be rushed. In music, experience can easily outshine pure ability but if you have both, you're on the road to personal bliss. Music is probably the most beautiful form of expression. To fully express all the emotions within myself and my subjects, I've always felt that I need to have extensive musical knowledge and skill. Though some disagree a bit, I still have a very long way to go and will probably never be satisfied with what I attain.

Since you think that you always improve and progress, do you think Scholomance as a band will continue to push their own boundaries? It seems to me that a lot of progressive metal bands reach their goal with a progressive album, but then they quit pushing themselves.

Yeah, if we don't feel challenged anymore, we'll no doubt put the band to rest. We would like each album to be a bit different while still keeping some of our signature ingredients. We won't do anything like Ulver and suddenly switch to electronica, but I hope each CD will have its own identity. There's still a lot we can do with this band and many things we haven't even tried yet. I think it can only get better in the future.

With "The Immortality Murder", you released a second disk that was without vocals. What was the reasoning behind this?

We thought it would be cool for people who were into traditional prog and shred metal. It's also nice to have something to show people who aren't into metal at all. The piano instrumentals can appeal to those people especially. We're great fans of instrumental music so it seemed logical for us to try it. People seem to enjoy the instrumentals a lot.

Yeah. I think it's a nice thing to have to show people who aren't into metal, because it's always the vocals that turn people off. Do you think you'll do this with your next release also?

We might do it again. I've wanted to do some acoustic guitar instrumentals for a long time. We almost did an acoustic version of 'Virus: The Theft of Knowledge' this time, but it didn't turn out how we liked so we scrapped it. I'm sure you can expect some instrumental madness, even if we don't do a whole CD of it. This time the piano stuff was improvised for fun, but I think if we did more piano stuff we'd probably do some more intricate and thought out pieces.

We just like aggressive vocals and playing aggressive music. We're death metal fans from the start. Aggression has always been appealing in what we listen to and like. There are tons of prog bands out there with melodic, and usually badly performed, vocals. There are not many technical death metal bands in the world. With a more brutal style of music, you have fewer limits on what you can do creatively. Melodic vocals are more limiting in my opinion. The music must suit the vocalist and must be flowing enough to allow for longer sustained vocal lines. With music like ours that constantly changes time signatures and key changes, a real singer would have nightmares trying to do it all correctly and in key. You can bet we're not going to simplify our music for anything. It only gets more complicated.

If you found a singer that had the ability to perform to the music, would you ever think of using clean vocals?

No, we wouldn't. I'd consider it on one or two songs perhaps, but it would really need to fit in and have a purpose. Like I said, we're death metal fans and I think the music will only continue to get heavier and more complex. A full time melodic vocalist would probably only take away from the overall heaviness. Maybe if it was someone like Warrell Dane or Tim Aymar it'd work, but certainly not your Stratovarius or Hammerfall kind of vocals. That kind of vocalist who can stay in key and still sound pissed is something that's truly rare.

"The Immortality Murder" is a concept album. Could you give us some insight into the concept, and if there is, what is the relation with the album and the cover art?

The concept follows the thoughts, personal work and writing of a serial murderer. It continues where "A Treatise On Love" left off. There are many details in the lyrics that deal with psychology, sociology, religion, love, and mental affliction. I don't really like to go into step by step detail of what everything is because I always feel its best for people to have their own perceptions on poetry, prose, and music. The cover and booklet art is an extension of the story and adds some locations and faces to the story.

It seems like the lyrical concepts are important to the band. Who writes the lyrics? Do they have input from the entire band?

The lyrics are just as important as the music! I usually write the conceptual lyrics and Jimmy writes some of the other ones for the single songs. We write separately and pretty much let each other do our own thing. I generally think shared lyric writing is very confusing. When we have two people with their own ideas and equal but different writing technique, it just works better to do the lyrics on our own.

In the future do you plan to get a drummer to work on the album instead of programming them?

I would like to say that we plan to get a full time drummer, but we can't count on that happening. We are an extremely demanding group of guys and we have yet to find anyone who is willing to put forth the effort needed to be a drummer in this band. We need someone with both a brutal playing edge and finesse and mastery, most likely from jazz training. It would probably need to be someone with at least 10 years of constant practice and band experience.

It should be pretty hard to find a drummer to meet those standards, unless somebody from an established band wanted to join you guys. Do you ever plan on touring or performing live?

We have never been offered a decent tour. We do play live in our area of the country. It's not that often anymore due to work schedules and other obligations, but we still do it. We practice a lot so we are more than capable of pulling off most everything you hear on the albums note for note.

In the metal scene right now, what do you think is good?

Hmm, not a lot is good in the current metal scene. It's all pretty redundant right now. All the bands that were once good keep releasing the same album over and over. I think Nevermore are a good metal band who continue to improve. I enjoyed the new Arch Enemy CD, Winds, and the new Arcturus. I listen to the older bands like Death, Entombed, Forbidden, Malevolent Creation, Gorguts, Cynic & Meshuggah. Apart from that I'm listening to extreme, technical hardcore like Every Time I Die, Burnt By The Sun, Eighteen Visions, and Poison The Well.

What are your plans for the next release? Any ideas yet?

I have lots of ideas in my head. It should definitely be a concept to surpass the first two albums completely. It will be more unified and one of the most in depth and detailed concepts in the metal genre. It's a daunting task to begin putting things together because of the vision I have for it. Musically it's in the infant stages right now.

Well I would like to thank you for your time. Do you have any last comments for the fans?

I hope everyone checks out our latest CD! If you liked the first one, you'll definitely dig the new stuff! Thanks for the interview.