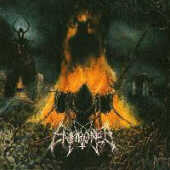 Buy on: Bandcamp
Type: Full-Length
Release Date: 1995
Label: Evil Omen Records
Genre: Black
1 Intro
2 Deny The Holy Book Of Lies
3 Under The Holocaust
4 Scared By Darkwinds
5 Tales From A Blackened Horde
6 At Dawn Of A Funeral Winter
7 Rites Of The Northern Fullmoon
8 Skeldenland
9 At The Sound Of The Millennium Black Bells
10 As The Wolves Howl Again

The most relevant black metal bands from Belgium are probably Enthroned and Ancient Rites. As you surely know, the latter have turned to a more or less symphonic approach during all the years, while Enthroned still have this diabolic element which is essential for the sub-genre. Their debut Prophecies of Pagan Fire is a celebration of pure black metal (of the second wave). The beastly nagging of lead vocalist Lord Sabathan mirrors the misanthropy of the black scene sustainably, the drums love raging speed and the guitars create different moods. And for the sake of completeness: the bass is also present while failing to set its own accents. Anyway, that's no major deficiency. In a nutshell, this album does not suffer from a bad production.

Enthroned act cleverly. The musicians do not only focus on high velocity, because the band has more to offer. Despite the similarity of some speed parts, the output does not lack variety and special effects strengthen the charisma of some tunes. The fantastic "Under the Holocaust" offers exciting speed outbursts, but actually it stands out due to the crying seagulls that appear after an acoustic break. (Short information for all animal lovers: the seagulls reappear in a less prominent role at the beginning of "Skjeldenland".) "Scared by Darkwinds" surprises with effective keyboards. I admit that rarely occurring keyboards are not the most special effect, but their targeted utilization increases the dynamic of the song. No doubt about it, Enthroned have a knack for precise impulses. Further tracks are equipped with mournful background choral or bells and a piano fight with the domineering guitars at the beginning of "At Dawn of a Funeral Winter". Speaking of the guitars, they sound either bitingly cold or they deliver crude melodies at full speed. Indeed, some tunes are enriched by the skillful use of the keyboards, but the persistence of the guitars characterizes the album decisively.

Of course, the band does not deliver a unique understanding of the black genre and it makes no efforts to hide its inspiration. A song title like "Rites of the Northern Fullmoon" leaves no doubts. During the mid-nineties, it was more or less impossible to evade the dominant influence from the (justified) media-hyped Norwegian scene. The fast sections show a spiritual kinship with the unleashed storms of Immortal's "Pure Holocaust" and I bet that the band members loved to listen to the minimalist yet powerful approach of "Transylvanian Hunger". Yet the rebellious horde does not prefer conventional verse-chorus-verse schemes and it masters the challenge to present suspenseful designs. For example, the aforementioned "Rites of the Northern Fullmoon" scores with an unexpected melodic sequence at 1:42. Without doubt, this potentially threatening debut is not the work of mentally retarded dudes who feel fine while creating a slavish imitation. The three-piece has enough own ideas without violating the unwritten rules of the chosen style. Although the fairly opulent full-length has a rather critical playtime of roughly 55 minutes, Enthroned avoid boring and / or repetitive sections. The enthusiasm of the vital band prevents any form of mediocrity.

"As the Wolves Howl Again" is not the best track of the debut, but it constitutes a mighty closer. It shows no signs of battle-weariness, even when considering the fact that it also includes calm and atmospheric sections and a fairylike voice at the end. Instead, the song serves as the last proof that there is no need for absurd discussions about the high quality of the full-length. I know that convinced democrats will not share this point of view, but that's no problem at all. I vote for the worldwide black metal dictatorship or the global thrash metal anarchy. It doesn't matter. What really counts is that Prophecies of Pagan Fire features a band whose members have already reached an amazing level of musical maturity. Too bad that Cernunnos (R.I.P.) killed himself two years after the release of this punchy debut.