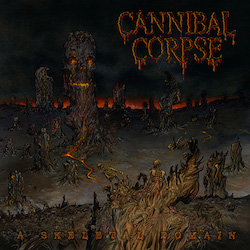 A slight change from the norm -- not in song titles or lyrical concepts, but a more "approachable" onslaught of metal due to the fact that Cannibal Corpse comes up with more listenable guitar orchestrations. A catchier infliction of domineering riff writing and leads, in the brief a memorable diseased warpath embodying thickness in distortion. Songs don't sound as repetitious of say Torture or older material -- a more solid approach of animation among the eardrum infestation. I say through and through, the writing style is heavy and virtuous, with less intense tempo infiltration, but still technical in terms of the riffs. I can't say that I fully enjoyed the "whammy" wah in their lead outputs -- I would say that is why I took some points off in a worthier scoring. If the band would have the leads taken out, then I might've been more generous in my rating.

Not to digress, but Corpsegrinder doesn't really sound any different in past discoveries in his vocal outbursts, he sounds the same. In my contention, his throat feeds well along the guitars and I would conclude that they wouldn't sound as brutal if he was taken out of the lineup -- though I do think that Barnes was better for the band, though we won't rehash ourselves from our earlier discoveries in musical form such as on Butchered At Birth and Tomb of the Mutilated. These were MY favorites and they've become a different band since he left then Fisher came in. For YOU guitar maniacs the sound of the band is as if they're once again here tuning to B-flat using a lot of heavy gauge strings with more heavy palm muted slays -- the technicality we shall revisit and say it is apparent once again with a "fresh" use in thickness extremities.

When we speak of the overall recording quality, its mastery is apparent. It exists here that the music is palatable, but in Cannibal Corpse's history I can't with full honesty say that this is their best work to date. I say it is solid no doubt -- their songs here flow rampant and the music is what makes the album admirable minus those leaks in weak lead guitar aspects. In ingenuity, O’Brien and Barrett come up with some interesting thickness, chunky, heavy, and explosive manifestations. To say this is a solid release is still the question -- would I be fair to say that this is deserving of a "greatness" or unfathomed ingenuity, I would say that it's a "B", a solid one if that.

We being listeners of metal know that this band have and will never depart from their concepts in lyrical domination, but I would be unfair to say that this one is unworthy of mention. The music does own the realm in its uncompromising heaviness as well as hefty drum episodes. A still same lineup as in past releases, just not really older releases therefore mentioned and covered. In proximity, this one musically is remaining to be heavy, dominant and ear deafening malevolence. It hits home with me, the riffs i.e. musical orchestration is summoning heaviness and would be prominent if as the leads technicality were more brightening or wholly omitted then the band would have a greater rating than what was given to it. A high "B" is still without a doubt, but Cannibal Corpse should focus more so on just the rhythms.

Concluding here as we've discovered death metal sheer precision, a definite boon to your collection, will not bore you as did (I found to be the case) older releases, just not the 2nd and 3rd albums -- those I deem as gems. They're definitely well over the styles in the early days with guitars that a much thicker and heavier distorted, whereas the early releases combined death metal vocals with a more thrashy guitar style. Definitely check out YouTube first to see if it's suitable to your palate, but I would say that followers of the band definitely will be more than satisfied with this one. Watch for catchy riff writing in both tremolo paths and technical onslaughts. Get this, it shall not disappoint or fall below your expectations -- it's notable and catchy, believe me in this entirety, the quality and ingenuity are well intact!

It's that time for another Corpse album. I won’t mess about at all and just have to get this off my chest – this album is mighty. It’s one beast of an album, full of everything and anything you could ever want from Cannibal Corpse.

For starters, I’m glad that the band chose to work with a different producer. Not that there was anything wrong with the Rutan albums, but it’s just good to change things up a bit sometimes. It’s a bit of a gamble, sure, but if it works the payoff can be huge, just like it is here – and just like it was on Kill. I wish more bands would take this approach, such as Nile, rather than just working with the same producer over and over again. You never know who’s going to bring out the best in you.

“High Velocity Impact Spatter” – just the title is enough to get you going, and shit, does the track ever deliver. One of the most crushing opening tracks in Corpse history. You’ll immediately notice that the guitars sound thicker than ever, the bass is nice and audible, the drums are exactly the way they are supposed to be, and Corpsegrinder sounds fucking amazing. His vocals are nice and loud in the mix without washing everything else out.

Perhaps the best thing about this album is that it has something for every Corpse fan. The lighting fast tracks, the mid-tempo, groovy tracks, and the downright dirty, evil tracks. It’s easy to hear things from their entire discography here. I've talked with a bunch of Corpse fans about this album, and everyone seems to have their own favorite set of songs – yet they are mostly different. Which just shows to prove that this album caters to a lot of different Corpse styles, which is great.

The band, being the seasoned pros that they are, perform flawlessly on this record. That’s to be expected, and it would really surprise me if the technical ability wasn't up there with the best. What did surprise me though was the energy rushing through this album, something I felt their previous record Torture lacked. But here, it’s all over the place, and it’s absolutely relentless, and great to hear the band so determined.

Another great thing on this album is that we have more contributions from Pat. Criminally under rated, Pat is an amazing guitar player. Not just technically, but he’s a fantastic song writer as well, so hearing more of his stuff on this album is a real treat. I wish Rob could get in there a bit more as well, as I have always loved his writing style in Solstice and Malevolent Creation. That said though, this is the best Cannibal Corpse line up there ever was and will be, and here the guys are in top form.

For me, it’s hard to pick my favorites, but I would say that the strongest songs on the album are “High Velocity Impact Spatter”, “Sadistic Embodiment”, A Skeletal Domain”, “Headlong Into Carnage”, “Icepick Lobotomy” and “Hallowed Bodies.” I realize that that’s basically half the album right there, but Corpse really have cut the fat off of this one and just thrown that sucker on the grill. And the end result is just pure death metal badassery. Go get this.

Cannibal Corpse has now been on a pretty good album streak with their last two full-length Torture and A Skeletal Domain. They see the band employing aggression in an intelligent manner to craft visceral, yet compelling death metal songs.

The songs definitely have a gore aspect that likens them to bands like Exhumed, who have more in common with Carcass than this band otherwise. The violence is played out well in the bands riffs that pay homage to those greats, but with a vibe that is all their own. The guitars are razor-sharp and the drumming provides a perfect backbone to the madness. Cannibal Corpse is fairly well-versed musically, but it’s how much the band enjoys playing their songs that makes them so enjoyable. There is a large dose of passion in the songs that eclipses what most death metal bands incorporate. The song-writing is solid and tight, but there isn’t anything overly innovative on this disc. It’s straightforward overall, but has enough nuances to be far more interesting than something like Six Feet Under. There is a far more driven nature to the music of this band that wants to craft a punishing platter of metal for the audience. See Icepick Lobotomy for the type of motivation this band has to craft a weighty piece of music. There is not much innovation here, but it’s hard to fault music that is this consistently well-crafted.

Quality oozing from one track to the next is something that seems to be difficult to achieve for some other death metal bands. A Skeletal Domain is eminently enjoyable on repeated listens. Most people know what they’re in for with this band, so enjoyment of the album is related to previous exposure along with interest in the band musically.