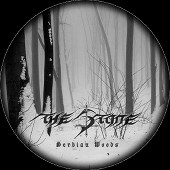 Serbian Woods was the first demo of Stone to Flesh, the predecessor band of The Stone. This means that the music dates as far back as 1997, although the publication of the here reviewed vinyl was made eleven years later. The slightly erratic configurations of the compositions reflect the fact that the songs were written at a very early stage. The four pieces rely on a cruel, raw and vehement approach. A partially blast beats driven hurricane rushes through the 'Serbian Woods' and the Serbian dubbing actor of Donald Duck nags incomprehensible sounds. But don't get me wrong, the guy performs dedicatedly. Moreover, the same goes for the entire formation.

In spite of the enthusiasm of the group, the guitar work indicates that every beginning is hard. I do not say that the leads are bad. Yet despite their brief durations, the songs, which do not significantly differ in terms of quality, do not consequently come to the point. The single parts of the ambitiously designed tracks are okay, but the overall picture lacks a certain degree of coherence and sustainability. This is not a big problem in view of the rigour of the formation, nevertheless it cannot remain unspoken. Thus, there is no hidden jewel to be found on the EP. But I do not care about this, because the songs are neither amateurish nor stupid. It's just a certain iota of pinpoint quality which is missing. And who am I to emphasize this minor shortcoming when talking about the unofficial debut of newcomers?

Last but not least, the sound of this grim output has exceeded my expectations. Of course, Nuclear Blast would have shot every sound engineer who would have dared to spoil one of their mostly sterile albums with such a mix. Yet this is no Donzdorf metal, we enjoy Norwegian inspired underground blackness. The Stone deliver a neither blurred nor powerless mix and the level of brutality gives no reason for complaint as well. Hence follows that the republication of Serbian Woods makes sense, not only because of the stylish picture disc. It reveals the roots of a band that has proven its stamina. No doubt, those of you who like to dig deeply in the metallic underground of East Europe should try to get a copy of the limited disc. I am therefore just sorry to inform you that number 168 of the existing 333 copies is sold out.