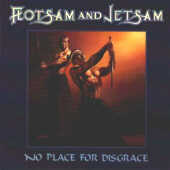 ...lifts the sword to help him die.

Flotsam and Jetsam have released a million full-lengths or even more, but only two of them are relevant. It goes without saying that I am speaking of their debut and No Place for Disgrace. The rest is an endless series of half-baked outputs and I wonder each and every day anew why nobody tells them that it is overdue to call it a day. It seems as if the guys do not have loyal companions by their side who lift the sword to help them die - in a figurative sense, of course.

Be that as it may, the miserable evolution of Flotsam and Jetsam was not foreseeable at the time of the release of their second album. No Place for Disgrace is full of vitality, it sounds wild and mature at the same time. The dudes still do not play the harshest form of thrash metal, many melodic elements show up. The chorus of "Hard on You" constitutes an example, but the same goes for the opening title track. Back in 1988, its soft part in the center of the song was both surprising and exciting. It does not kill the power of the composition, although it stands in sharp contrast to the speedy sections that frame it. But the title track is not just another good thrasher, it also shines with its intelligent lyrics about an aspect of the fascinating Japanese culture, the Samurais and their code of honor. Lines like those I have used for the headline and the beginning of my review get under the skin - and they have nothing in common with the violent (and sick) fantasies that many of their competitors preferred at that time.

This stunning giant at the beginning of the album sets the bar very high. But Flotsam and Jetsam do not slacken the reins. This is not one of these works that offer a brilliant opener and nothing else. Okay, I will never understand why a metal band plays a cover of Elton John, but Flotsam's execution is acceptable. However, it makes more sense to have a look at their further songs that do not originate from another artist. They show the compositional excellence of the band during its best phase impressively. The aforementioned melodies do not prevent a compact and robust, heavy and fast overall picture. They enrich the songs without giving the album a non-metallic character. Be assured that No Place for Disgrace holds many tightly performed eruptions of velocity.

Both "Dreams of Death" with its great chorus and "N.E. Terror", a song with more than thousands of verses, are characterized by speedy sections. Especially the rasping guitars of "N.E. Terror" add a sharp edge, but "Dreams of Death" also scores due its excellently driving main riff. Similar to the title track, both songs offer a less rapid middle section, but they do not come to a halt. Better still, despite the comparable patterns, all these songs (the opening trio of the A side) develop their own identity. This applies all the more for the last (own) track of the first half. "Escape from Within" combines a harmonious beginning with blazing fast guitars that shape the second half of the song. In my humble opinion, these four tracks belong to the best pieces that the US American thrash scene of the golden eighties has ever brought to light. By the way, this is inter alia remarkable, because the sound of No Place for Disgrace is not perfect. The guitars lack transparency and the entire production appears slightly vague. Nevertheless, the mix is powerful, and its five percent of opacity do not give the sound engineer poor marks. Names like Bill Metoyer and Michael Wagener speak for themselves.

With the exception of the outstanding "Hard on You", whose chorus will give you sweet dreams, it might be that the B side is a little bit weaker than the first four songs. But the B side is blessed with the absence of Elton John. That must also be taken into account. I admit that the final song of this side is also somewhat strange, because the instrumental follows a minimalist approach which stands in contrast to the juicy pieces of meat that the album holds to this point. Anyway, the remaining tracks show a belligerent, very agile and competent group that has reached its zenith (without knowing it). With this said, it can be no doubt that the album deserves the predicate "formidable". Flotsam and Jetsam were a force that seemed to be able to challenge Metallica and Slayer in terms of commercial success - without writing commercial music, don't get me wrong at this delicate point. Too bad that things went wrong. So, let's call a detective agency. There must be a companion of the band somewhere out there.