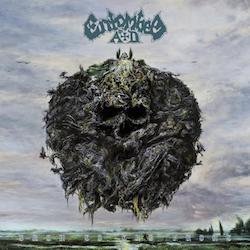 Over 7 years of waiting. After a brilliant, heavy as Thor's hammer album, which was Serpent Saints, 7 years of long waiting for another album. I was very happy when I read about this last year. And then suddenly line-up problems and date of release pushed forward to 2014. That was really horrible, especially that no new date was given. No words can describe how I felt when I heard about this album being ready for reviews. And since I listened to it for the first time it hasn't been switched off, doesn't matter if I'm at home, in my car or at work.

To sum everything up, this album is just a gem, which will become a classic very soon if properly promoted. It is a very good reward for that long waiting for the album's release and it seems that Lars found a brilliant guitarist, who can deliver. In genuine Swedish death metal style. Brilliant production with very good sound - heavy, low-tuned guitars, powerful growling, melodic solos - you can hear it all without any problem, very good job done on the mixing part. This album pushed Entombed A.D. to the leading position on Swedish death metal scene and in my opinion they are there to stay. And Nico Elgstrand is a genius.