After seven years Entombed returns as Entombed A.D. with new autstanding album "Back to the Front". This was a perfect time to get some answers from band's guitar player Nico Elgstrand. 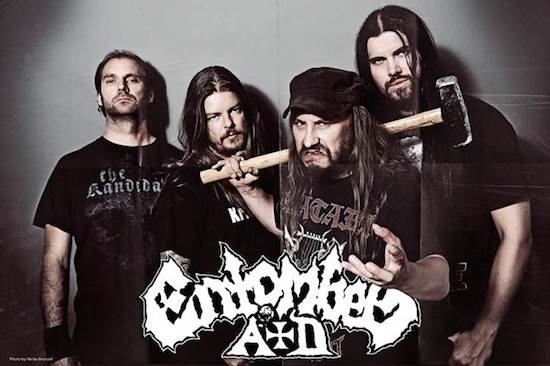 Hey Nico, few days ago was your 43th b-day so first of all: best wishes! The older the better to play death metal?

[Laughs] Thank you, they say you get wiser when you get older but I don't think that goes for death metal guitar players who generally are not wise to begin with. Still enjoying it very much though!

Why your stage-coming took so long? Seven long years! All the mess with Alex wasn’t the only reason, wasn’t it?

Serpent Saints was straightforward reference to Entombed' death metal basics. Back to the Front seems to be more influenced by your death&roll story in the middle of band existence. Was it intended?

Not really, we just tried to come up with the best songs possible and not think consciously about what we were doing but rather go on feel! It's never good I think to decide what u are gonna do exactly, that only limits the possibilities.

I read somewhere (in some of Entombed reviews I guess) that the one who lost the most because of reshuffle in the bandwas Alex, not the rest of the band members. Well, I’m totally of the same opinion. You return in great style. What's your point of view?

Thanx very much, yeah I still don't understand what the hell his plan is, it doesn't seem that there is one but that's on him. We are just happy being back doing what we're supposed to do you know, play death and perhaps have a beer in between [laughs].

Anyway, no matter what happened in the past, today you still play and sound like an old & well known Entomed. The band kept its unique style. Did you change anything significant in studio working scheme after Alex leaving?

Yeah we started communicating and let everyone put their vibe on it rather than try to squeeze a performance that wasn't in that person so to speak. It's never smart to try and make tomato soup if you only have carrots. It was hard work but very rewarding in the end.

Undoubtedly nobody treats Entombed like a fresh meat on death metal scene, however at the moment the copyrights to original band name are divided between four former members: LG Petrov, Alex Hillid, Uffe Cederlund and Nicke Andersson. Do you think there’s a possibility to find a solution and finally end up all that mess?

I certainly hope so, although at the moment it's looking not so good. He who lives shall see!

Tour with Grave is just behind the corner. It starts in next few days and fortunately you’ll also come to Poland. Do you have any expectations regarding this tour? You had a long break from touring and all the stuff related to be on the road.

We're just happy to get out there and do what we do. We've done festivals through August and a short tour in Japan and it's really great to be back in the thick of it. We want everybody in the venue to die at each show on this tour, including us [laughs]. Metaphorically speaking obviously! 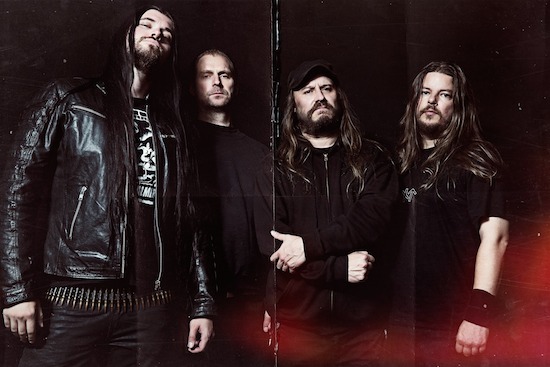 Do you remember Entombed' live sets while Masters of Death tour done along with Grave, Unleashed and Dismember? That was totally incredible experience! And the forthcoming tour will be a kind of the same, in a bit more cutted variant.

Thanx, I shall hope it will be the same but much better. We feel that we are a much tighter unit now and play together in a way that I believe will please everybody showing up.

You recorded the album as a team of 4 members, but during live shows you’re supported by second guitarist Johan Jansson. Is he already the new member of the band and if yes – how did it happen?

Yeah man he's in, solid as a rock he is. We were gonna go through a whole bunch of guitar players and just tried him out on Victors recommendation, instantly it sounded great and felt right. If it ain't broken don't fix it as they saying goes.

You skip bass for guitar but to me you always were a guitarist who only played bass when it was needed. Not the opposite. Is that correct?

Precisely, I've always been playing guitar and just happened to end up on bass for I think ten years or so [laughs].

Solo parts are very typical detail for Back to the Front. What is more, some of them are very melodic in particular in tracks like 'Pandemic Rage', 'Eternal Woe' or 'Digitus Medius'. How long did you work on this side?

I don't really think and work on it so much but just go and pick the take that has the best flow. Some of the melodies you are referring to we're written but most of it is just of the top of my head at the time. It's really quick and works good for me in one way but on the other hand I always have to go through hell to relearn it afterwards since it's very spontaneous when it's recorded.

Please tell me few words about gear you use. The more detailed answer, the better!

In the studio we were mainly using an old Marshall head from the seventies and various weehbo distortion pedals such as JVM drive, plexidrive and bastard. Some old electro harmonix fuzz pedals and a line driver called the godfather which was awesome. That was it as I recall.

Guitars were mainly my dear 71 strat hard tail and a Gibson les Paul special from I think 92.

Nothing fancy. When we play live I use a Microamp or an Echoplex straight into the amp and a Boss tuner, that's it, I like to keep the gear simple. Any effects the front of house soundman gets to put on there if it's needed but usually it isn't. Again, if it ain't broken fuck it [laughs]!

Final question. Why actually Terra Firma splitted up? Don’t you miss it? Harms Way is a great record, one of my favorite.

[Laughs] thank you, it was good fun and I really enjoyed it musically at times but there was a lot of problems within the band that finally took its toll. Can't say I miss it, I'm much better off with Entombed.