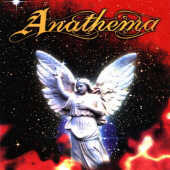 After the magnificence of "The Silent Enigma", this band progressed quite a bit in just one year. But, not every band is perfect. Anathema takes the ideas of the previous album and brings in some new elements, but doesn’t quite tie everything together. Unfortunately, and as much as I hate to say it, Anathema did stumble a bit on "Eternity".

Opening with a beautiful intro that one can sit back and relax with, it would seem that all is well and there are no problems. Soon after, the band moves into 'Angelica', one of the most beautiful and heartfelt songs Anathema has ever crafted. Then the album moves into the powerful 'The Beloved', transitioning from more aggressive moments to more calming passages, emphasizing both sides. Followed by the two-part 'Eternity', the first part being an emotionally intense ride, and the latter being more of a spoken track which transitions nicely into the track that is 'Hope'. This is an excellent track that has a great melody throughout and wraps up nicely what is the better half of the album. The second half of the album is harder to sit through and find comfort in, excluding the excellent closing, 'Ascension'.

The rest of the album’s tracks are much more hard to grasp, and probably won’t ever be great even if you studied them beginning to end. 'Suicide Veil' draws itself out way too far, only to be drowned in itself. 'Radiance' is another track that is a bit boring on its own, only briefly surprising the listener with a well-done ending. 'Far Away' isn’t actually a bad song, but in comparison with the great beginning it’s just lackluster. The band comes back for more with a third part of 'Eternity', but compared to part one this track too is only mediocre. While 'Cries on the Wind' has the right idea, it is still a few steps away from being great. Lastly the album closes with an excellent track called 'Ascension', which begins with an excellent performance from the band and ends with wonderful piano. The second half of the album is still good, but it’s not really up to par with the first half, or with other Anathema material.

Despite the mediocre moments, Anathema’s performance nears excellence. Vincent Cavanagh is the only real difficulty in the musicianship. Whether he is even a problem is debatable. Even though his performance is rough around the edges, hitting a few ugly notes, he does an excellent job of conveying emotion and continues to show improvement. Guitarist Daniel Cavanagh, as always, does a spectacular job. He has his own unique sound and style that is identifiable right away. Duncan Patterson has some excellent bass lines and he fits very well underneath the great instrumentation. Drummer John Douglas’ skill is unquestionable. He fits the music on any occasion and doesn’t try to cram fifty fills into a single bar of music. The performance of the band as a whole is great, with only a few minor problems.