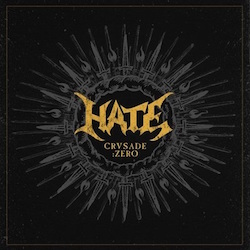 It feels like yesterday when excited I listened to first sounds of "Solarflesh" and kept on listening to it for next week over and over again. And here we've got another masterpiece from Hate called "Crusade:Zero". And it seems that now bands that have been on the scene for a while spark a lot of discussions regarding the style, the development and how frequently they change their style and whether they should do that or not. Being a fan of metal for nearly 30 years now I have mixed opinions myself about many bands and from some of them I would expect some change, but with some of them I'm happy if they stay the same. And I don't expect anything else from any other metal fan. That's the beauty of art - everyone is entitled to their own opinion, especially artists themselves. And we have quite big choice of metal nowadays and it's much easier to find whatever you like and either you stick to one favourite band or you keep on changing your favourites every week. I definitely wasn't expecting what I heard from Unleashed on "Where is Your God Now?", but in my opinion those blackened elements actually are something I like in their Scandinavian death metal.

But I digress. Hate's "Crusade:Zero" is their ninth album and they follow the same path since the album "Anaclasis", and it's so good that if I was a castaway and had only their last 5 albums on my mp3 including this one, I wouldn't need anything else. Well, maybe a charger. I remember listening to the latest Behemoth last year and had an impression that their tempos have become a bit slower, same thing seems to have happened to Hate, but not to that extent and "Crusade:Zero" fits my preferences a bit more, I don't know what it is, but Hate's album is more headbanging-recommended to me.

There are obviously few changes, but the band maintains the same high level of technical perfection, with that amazing eerie atmosphere thanks to the sounds in the background which just enhance the material, but do not distract the listener from brilliant guitar work and drumwork. After second and third listening you start noticing those tiny details that Hate's version of death metal is known for and it's getting better and better with each new album. The drumwork is brilliant, I'm sure that Pavulon would show at least a distance of a marathon if he had a pedometer attached. That's another change - Hexen left the band nearly a year ago, which made me wonder if the new drummer would fit his shoes, but it sounds like Pavulon was a great choice. Well, to be honest, if you recorded two albums with Vader ("Necropolis" and "Welcome to the Morbid Reich") you probably have a VIP pass to any death metal outfit...

Anyway, to sum up, this is another perfect Hate album, with all the elements expected from their style, powerful riffs, blast-beats, crushing growling from ATF Sinner accompanied by good solos and atmosphere which wants you to play this album few times in a row to catch all the details and remember them well. Nearly an hour of brilliant death metal with tracks full of head-banging tempos and complex riffs. It goes straight to the list of my favourites and so far "Leviathan" is my favourite track.