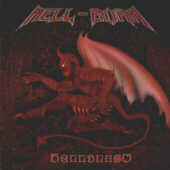 Spawning from members of Behemoth and Damnation, Hell-Born is your typical blackened death metal band. After reforming themselves in the middle of 2000, the band rehearsed intensely for what would be their debut album. As they say, practice makes perfect, but maybe the band should have done it a bit more. But, while “Hellblast” is an album that falls short on many areas, it’s a tolerable (only barely mind you) debut for this trio.

As I said, Hell-Born is a typical black/death metal band. Their music is mainly focused on death metal, while the lyrics of the band lay more in the field of black metal. Most of the ideas used on “Hellblast” are clichéd and have been derived from a derivative from another band. While there are bands that are not original and are good, Hell-Born isn’t one of them. Not only are the unique bands better than these guys, even the not so unique ones are better. Listening to the music you can tell the band strove to be different, but they just weren’t able to pull it off. Their ideas sound like they took work to pull out of themselves, and lots of it. Their composing ability is only mediocre also. The transitions in the music are many times less than decent. Sometimes the band opts to even use transitions and will just drop one idea and move to the next. Thus, the music is choppy and tedious. Hell-Born basically have every end of them frayed.

The album itself has no real defining characteristics. After listening to it, you should be thinking to yourself, “Why did I just waste 46 minutes of my life? I could have gotten all the elements of Hell-Born and more somewhere else and it would have tasted a lot sweeter!” The songs tend to run dry by the end of them, as does the entire album. That has much to do with the fact that half the songs sound like the other half, and you just get lost in the member’s train wreck of thought. The entire album is just a mess of unfinished and/or poorly drawn out ideas.

Bottom Line: Hell-Born have disappointed me with their underdeveloped approach to the scene. They not only failed to be creative and unique, but they failed to even keep their head above the water. This is only their debut, however, so it would not shock me if Hell-Born’s next serving were a much cleaner, and ultimately more well thought out album.