With the disappointing initial album "Hellblast," Hell-Born's follow-up record "The Call of Megiddo" was undoubtedly approached with some negative apprehension. Fortunately, however Hell-Born were able to turn the tables and deliver a record that is full of conviction and faithfulness towards the death/black/thrash metal of yesteryear. Jeff (guitars and backing vocals) from Hell-Born delves into the workings of Hell-Born and his desire to keep Hell-Born a band that will never compromise ideals or music despite the waves of various new metal trends. 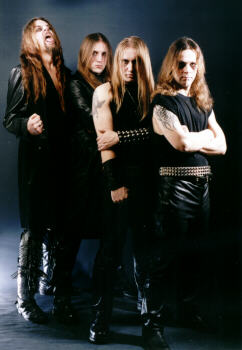 I am very pleased to see and hear that Hell-Born as a unit has progressed and improved in almost every aspect of their playing and composing ability. "The Call of Megiddo" is a much more finely tuned piece of work. I wasn't a huge fan of "Hellblast," I must say. I thought the album was a bit lackluster, and possibly lacked a noticeable direction as to where the album was going. On "The Call of Megiddo" things have certainly turned around for the better. The record is shorter, sharper and has a bit more punch to it. The song compositions are catchier and more fluid. Not to mention the playing ability of each member seems to have gone up a notch. How can there be so much change in the space of one album?

"Hellblast" was our back from the dead album. We came back after a few years break and we were not sure what people's reaction would be. That's why "Hellblast" was kind of a test. We recorded five new tracks and added to the album our old mini CD "Hell-Born" from 1996. In fact, we couldn't afford to record a full-length album. We didn't have enough money and some of the tracks had to wait for our next record. "The Call of Megiddo" is absolutely new stuff without any old bonus tracks, so because of that, it's more coherent. Also the drums are better because of Basti, who played on the record. His playing is different than Baal's, in the sense that it is more death-metal oriented, so the stuff is more powerful and punchy.

How much of a more sophisticated and more successful album is "The Call of Megiddo" in your opinion, compared to "Hellblast"?

"The Call of Megiddo" album is more cohesive. All tracks were written in 2001/2002 and on "Hellblast" you can find our tracks from 1996 and 2000, so they are more variable. "The Call of Megiddo" stuff is more compact and massive. You can see natural progression in Hell-Born's music. Nobody wants to stand in one place and make a copy of his or her last production. We were determined to continue our style from "Hellblast," and that's why "The Call of Megiddo" is not so far from the "Hellblast" album stylistically. But, we also wanted to go one step ahead, to do stuff faster and more aggressive stuff, and to kick more ass. And we did it.

The cover of "The Call of Megiddo" is pretty menacing. What does it symbolize for Hell-Born?

The author of the cover concept is Baal. He was determined to have a simple and raw cover in a time when covers of metal bands become more and more illegible and occasional without relations with lyrics. Does it really need explanation? I don't think so. The meaning of "The Call of Megiddo" album is fucking clear and means exactly what you see.

In relation to the question about the cover of "The Call of Megiddo," what does the title mean?

It is our answer to the Christian threat of total war between God's army and the human race. It means we're ready! 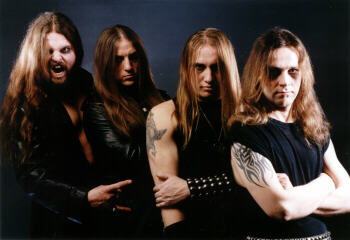 The lyrics for "The Call of Megiddo" overall seem to bring about a concept of a dark army rising up from the ground with the sole purpose of vanquishing their foe. Songs that represent this are 'Legion is Our Name,' 'We Bring the Reaper' and 'Evil Dawning.' Is this what "The Call of Megiddo" means to each of you guys?

The lyrics on "The Call of Megiddo" are unleashed hate and fury towards Christian liars and hypocrites! They're our message to them.

How have fans of "Hellblast" reacted to "The Call of Megiddo"? Is it an album that you expected fans to really latch on to?

The response is excellent! People were a little bit disappointed that after four years break they got only five new tracks on "Hellblast." After "The Call of Megiddo" all of them have been satisfied and have become our true, faithful maniacs. "The Call of Megiddo" got very good reviews, and tracks from that album were released on at least 15 compilation all over the world in such well known magazines as Terrorizer or Legacy. We are really proud of that!

Hell-Born is obviously inspired by a lot of the early death and thrash outfits in metal. Who specifically did you guys used to listen to when younger (or still listen to), that may have shaped who and what Hell-Born is today?

You opted to use Hertz studio again for "The Call of Megiddo." Did you have a bigger budget this time around? It seems that the production, like the music has improved greatly.

When we had been recording "Hellblast" we didn't have a contract so we released it by ourselves. "The Call of Megiddo" was recorded after Conquer Records had signed us, so budget was not a problem. We did not hurry this time. We could work as long as we needed, so the situation was absolutely comfortable.

Basti is the new guy to Hell-Born, playing on drums. During the course of "Hellblast" Baal Ravenlock played drums, and did vocals, whilst you did bass. Now in "The Call of Megiddo," Baal handles bass and vocals, while you play rhythm guitars, leaving Basti to handle drums. Why was there an introduction of Basti into Hell-Born? It did seem as though you had all bases covered with the setup on "Hellblast."

No it didn't. In fact we released "Hellblast" as a three-piece line-up due to enormous problem with finding a drummer. That was the reason that Baal recorded all of the drums parts. As you know he played drums in the nineties in Behemoth and Hell-Born. After a few years break in playing he was still a much better drummer than all guys we checked out. That's why we decided on that solution, but it was temporary. After the studio session we continued looking for a drummer and finally Basti from Devilyn agreed to help us. Unfortunately he has been living 600 km from us and cooperation was a little bit troublesome. We released "The Call of Megiddo" album and we played a few tours together, but when we found a drummer in our city, Basti came back to Devilyn and his other bands. The new man is Chris and he had been playing in a few thrash bands in Poland so he's experienced musician. And I? We started playing with one guitar but after the first recording and shows we decided to develop our sound and I started play on second guitar. I have always been a guitarist. A bass-player was a just a position in Hell-Born. 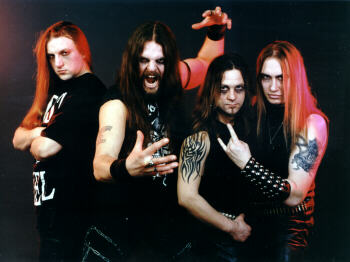 We didn't do much touring after recording "The Call of Megiddo." Basti was very busy with his other bands so we played only a few gigs in Poland and a few festivals in Europe. Moreover, our US tour 2003 was shifted from January to November so when Chris replaced Basti we concentrated on new album. We entered to the Hertz Studio in June 2003 and you can expect our new album out in autumn. Then we're going to hit the tour. In September we're playing several gigs all over Europe and in November we're visiting USA and Mexico. In December we're planning a tour in Poland.

I think the title track, 'The Call of Megiddo' is by far your best track. It incorporates catchy riffs all the way through, and the lyrics and music are penned down in such a way to truly become a classic Hell-Born song. How well does 'The Call of Megiddo' and indeed the rest of the album translate into a live setting?

Do you see Hell-Born remaining as a fundamentally death/thrash/black metal band? Is there other musical territory you wish to explore later on with Hell-Born?

Absolutely not. Hell-Born is faithful to the ideas of old death/thrash and black metal scene and we are not going to change anything in our music. All we want to do is play the best black/death metal stuff ever and be as classic as possible. Death to false metal!

Thanks for taking the time to answer these few questions for me. I look forward to seeing the musical outputs from Hell-Born in the future. Good luck.

Thanks a lot for your support. Hell fucking hello to all maniacs in your country! Check out our "The Call of Megiddo." album and wait for our new album in autumn. Keep the flame of true black/death metal scene! Legion is our name!