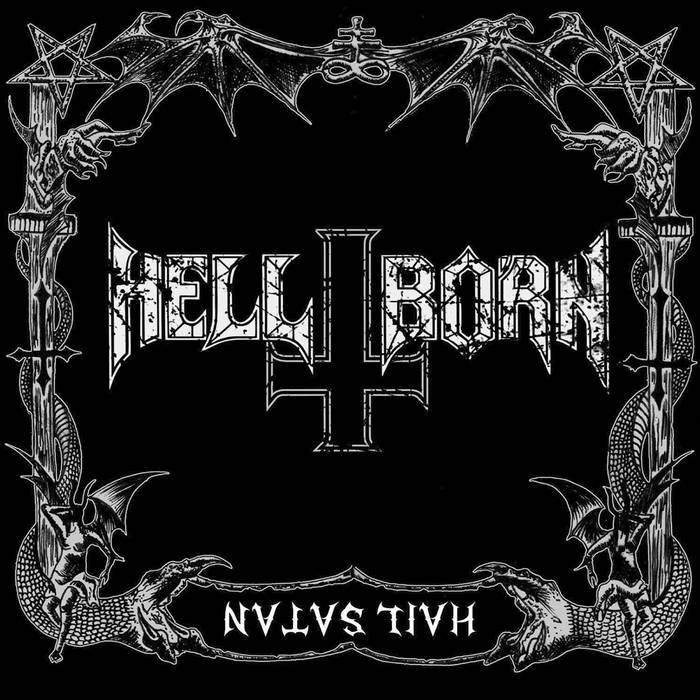 A 45 minute ass kicking from Poland to start the year off with is just what you need to fight off the winter depression. Comprised of 3 demons, Les and Baal of whom played on the legendary "Sventevith (Storming Near the Baltic)" and "Grom" to name a few, while the other carries a heavy weighted belt of experience around his waist given the involvement with bands such as Throneum and Mordhell. The longstanding Hell-Born shows how it's done on Natas Liah when faced with the black/death/thrash metal question. Don't be mistaken, this is very much textbook, however it is not a tutorial for beginners; the record is veteran grade material.

Apparently Natas Liah is their comeback record after having been without any new music for a while now. I can't speak for their past efforts due to this being an introduction to the unit, but what I can say is Hell-Born are definitely up the higher ranks of the genre. And who could doubt it, especially with a lineup equipped to deal with the task of demolishing the area. They don't waste any time, the first track strikes fast and with crushing weight, hitting all the main pressure points of modern black/death/thrash. However the band makes certain to not just provide you with the bare shell of the format, as they proceed to take the body and stuff it abundantly with riffs, glorious melodies and bruising blast beats for winters long after.

Here to do the devils work indeed, and excel they do, thoroughly providing molten destruction with the scorching opener 'When You Are God' that sets the stage for the heatwave to follow. It's barely even noticeable when you get to the middle of Natas Liah due to the album moving so uninterrupted as a result of thoughtful and well executed songwriting. Hell-Born know exactly when to take a bit off the pedal, when to kick into overdrive and which areas of the songs require support. The riffwork steers much of the variation but is not without the aid of the drumming that aligns itself in adherence with the changes occurring in the riff structures. However this is not done only to conform, things are kept interesting on tracks such as 'Uroboros' and 'Son of Earth' transforming into a display of drum and guitar standoffs most delightful to the ear. While the vocals being mostly one dimensional though effective, they use the musical wizardry to exclaim its presence.

Favorite track?, that's a tossup among 'Blakk Metal', 'When You Are God' and 'Axis of Decay', fucking grade A blackened filth. Listened to the record back to back for those tracks. Killer tunes from Poland and a band that knows how to make their return, or perhaps they never left thus the spark and flame were always there. Most notable Adam 'Nergal' Darski among others is a guest on the album; I just hope he used the outing as a soul-searching-session to reconnect with his former, better self, you know the one that created "Satanica", and not that fucking hippie shit we're getting now; however, I digress. Nevertheless, the presence of his vocal nastiness on 'Blakk Metal' that features some real second wave tremolo picking and synth was the bit of rot required to bring Natas Liah to a condemned closing, and yes once again another standoff between drums and guitars towards the end.