Kralizec for the better part of many years have remained unknown. Canada, let alone Québec has hardly been known for its perpetual foray into the metal world, however with Kralizec’s new record "Origin" hopefully things are about to change. Combining the best elements of subtle classical, black mayhem (think along the lines of Emperor’s more soothing moments) and pummeling death metal Kralizec have put together a record that defies classification and ranks as a purely great listen. Kaleidoscopic vocalist Ben divulges some information as to the workings of Kralizec past, present and future... 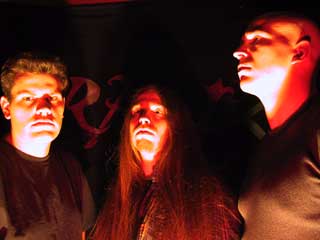 Greetings Benjamin and well done on a fantastic effort for Kralizec's debut album, "Origin!" How is everything working for you in Quebec at the moment?

I must admit that we are pleased by your reaction towards "Origin," and we ought to thank you for the support and cheering up.

Life goes on with its share of good and bitter tastes, but the global picture looks mostly clear and shiny; that being the result of hard-working people and gallons of sweat.

Briefly; everything works quite well up here.

Yourself and Stefano were part of a metal outfit called Deafness. Did Deafness subside to make way for Kralizec, or was it more of a case of François and Patrick joining Deafness and then it slowly morphing into Kralizec?

François was an original founder of Deafness, and that occurred about nine years ago. My path then came across the band, and we later included Stefano. The inclusion of the latest in the formation completely halted the development of new material, simply because the other guitarist was unable to understand (much less play) the rapid and complex riffing Stefano threw in his face on a daily basis.

Patrick never really joined Deafness, as his very arrival signed the end of the band and a necessary renewal for the entire material.

How does Québec rank as a decent source of inspiration for you? Coming from such a remote location (from a metal point of view), is it hard for you guys to get motivated to put down some metal tracks when there seems to be a distinct lack of other bands coming out from Québec?

The remoteness is but a question of perception, but I think you would be right in saying that the industrial infrastructure of metal music is, on a commercial point of view, somehow deficient in Canada.

There are plenty of bands, but the population centers are so few and so far apart from one another that it is difficult for the bands to expand onto new scenes, as the matrix of the metal genre in Canada is constituted by small and individual scenes spread on the whole territory.

And yes, effectively, there is a large number of small bands in Québec, of which very few send an album across the borders. Therefore, the window an outside label can offer us is quite some opportunity.

To finally answer the core of the question; we find precious little (if not at all) inspiration on the local scene. Not that the bands are not displaying quality; simply that we got disconnected from the scenes and concentrated on our very own music.

Are you planning to play outside of Canada... perhaps moving down into the US in order to support "Origin"?

Planning? No, we haven't reached that stage of the process yet. Still, if need be, we would definitely move south to support the album, but it's not an element of the promotional campaign.

You have been cracking the metal whip since 1998 and finally came out with something in 2003. Are Kralizec in the metal industry for the long haul? Can we expect to see more and more of Kralizec in the coming years?

Breeding new material is for us a long and painful process, but we will complete at least two more albums before thinking of retirement, which in terms of years could border another four or five.

Unfortunately, as you well know, it is the industry that chooses the bands, and not the other way around. Consequently, if we get the incredible chance of being chosen, we may then indefinitely prolong our journey into the metal realm. 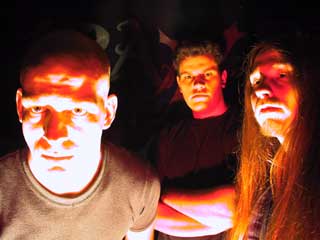 Since "Origin" is obviously your debut record I would imagine that a lot of the material spans the whole life of Kralizec, from its origin (sorry... couldn't resist) to present day. Has it been hard to slot all the material into together and still retain a unifying aspect to "Origin"? Considering that some of the content on "Origin" might have been taken from early in the band's initial inception, whilst other songs may have been composed just recently...

Your lead is correct; Patrick Loisel arrived in the band with 'Oceano Nox' already written and ready to play, and with the core of 'L'Éternelle Danse' and 'Apatride,' the two latest being completed in cooperation with François. 'Néant' and 'Kralizec' were evenly composed by all three musicians, and 'Le Vigile' by Stefano alone.

'Sailing to The Origin' was made in a rush and last of all, by Patrick and myself, as we were in need of more material to display in one of our first appearances. We sat down in our rehearsal temple and started putting together all the pieces of this vast puzzle. The next song only came a full year later and never recorded.

We can definitely put all "Origin's" songs in the same period of time and thought, and yes, it has been hard to put all that together, for the simple reason that the clash of opinions sometimes got pretty messy, our musical influences being totally divergent.

Undoubtedly the trump card of "Origin" is the 9 minute track, 'Sailing to the Origin' which unveils a vast array of vocal talents by yourself, and really sums up just how diverse Kralizec are. Of course, you don't want to have separate and pick out tracks from a very even album... but if you were to pick a track to exemplify Kralizec to this point I think 'Sailing to the Origin' would be a very good choice. Do you agree?

I am sorry to admit that I don't agree on that, 'Sailing to the Origin' being mainly composed by Patrick and myself. Our representative track would definitely be 'Kralizec,' as its content reflects the contribution of all the band's members and their colorful influences.

Nevertheless, the actual axis of advance of our musical style takes us towards the blend of the whole of "Origin's" tracks, not just one in particular.

I think one of the most impressive aspects of "Origin" is that is an album that will likely appeal to a whole host of fans who may not be into the other forms of metal displayed on the record. For example, I think many black metal fans will really get into "Origin" even if they are not huge fans of death metal. Fans of pure avant-garde music will surely find some solace in the atmosphere and keyboard sections throughout "Origin" also.

True, and that's the reflection of long years of internal fighting, stabbing and conceptual skirmishes, mainly between Patrick and me, but soon everybody got his feet wet. For instance, he is an irreducible power metal addict and I am a grind death fanatic, therefore I had to fight my way through to vocal control, and at first the black vocals were but compromises to appease the inner tension of the band...

There were in fact two clans in the bands; myself and Stefano being violent music fans, and the others being in search of melodies and ambiance. That is why nearly every metal fan could find a tiny piece of "Origin" he could like, as nobody in the band won that bloody carnage.

Who do you pay homage to in your vocals? It's pretty hard to pin down what you look for in inspiration due to the chameleon-esque nature of your vocals.

I 'stole' vocals long enough to form a breeding pool from which I draw the ones I make my own.

The pioneers I humbly salute are of course Chris Barnes, Masse Broberg (good ol' Hypocrisy), Craig Pillard (Incantation) and Glen Benton. These powerful vocals formed the strong basis on which I constructed. 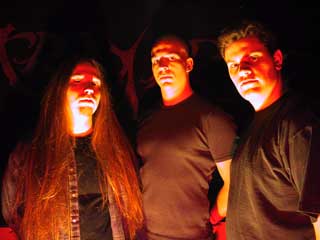 You must be stoked with the amount of promotion Maquiavel Music Entertainment (MME) is able to devote towards "Origin." Whilst only being a smaller label in terms of signed bands MME has indicated that they are going to fully promote your debut for a full year. This is pretty extraordinary considering that many of the largest releases around the world are only promoted for a few months before the labels move onto new releases. Is this what drew you guys to MME?

Well, smaller labels must battle harder and longer than any label giant to promote any given band to the widest public possible; therefore I think it is reasonable that MME extends the whole procedure onto a year, as they must accumulate some potential before they can equal any one time effort given by a giant label. Consequently, this is not what drew us to MME.

The label came to us through our official website (which is now under a global review and update), and after six months of well-behaved dealing, we signed the alliance on a basis of mutual blind trust.

I was checking out your website for the lyrics and noticed that "Origin" is divided into 5 sections. The Free Thinker, In the Presence of Loneliness, The Libertine, The Heretic and finally the Epilogue (all English translations from French). On the promotional copy I received MME there is no mention of "Origin" being divided into 5 parts. Will the retail version feature some notes about "Origin" and its concepts?

The original concept was published in a limited edition of the "Origin" album, which was presented in a black leather book with a golden K stamped on the cover, containing 68 pages of text printed on thick old-style paper.

Allow me to clarify the material: all those texts were the global essence of the "Origin" concept, and there were three sections, not five, each corresponding to a way in which Mankind had searched for his origins, as the Free Thinker (through reason), the Libertine (through morality) and the Heretic (through spirituality). These were preceded by the prologue titled (translation from French) 'Towards the Origin', and concluded by the epilogue titled (translating again) 'Nothingness.'

We sold all of these well-crafted albums and decided not to push forward the whole concept for the re-edition, but instead to display it on the website as a reminder (or warning) of what will be coming next.

Why write in English and French? Was this done to appeal to your 'home' fans as well as to the majority of people who will be buying this record?

We never considered the possible appeal of any part of our creation, not at any step of the production process. The band itself is bilingual (Stefano is an Anglo-Saxon, the other three are French descendants), and our country is officially bilingual.

Still, chances are that the second Kralizec album will solely deploy the beauties of Molière's language in its pages.

Thanks for answering my questions Ben. The floor is yours...

It has been a pleasure. Accept the band’s sincere salutations.