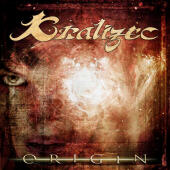 Hailing from Quebec in the French part of Canada, Kralizec could be the vital kick in the guts that black metal has been screaming out for in the past few years. Combining a willful desire to inflict symphonic and classical undertones through a mystical wash of black and death metal Kralizec's debut record "Origin" may be a sleeper hit come the end of the year.

A gentle slashing of symbols by drummer François Archambault paves the way for the barrage of death metal to accompany the opening song in 'Kralizec.' Benjamin Leclerc grunts along with the best of them providing a great spin on the classical guttural growl employed in death metal by singing in French, adding some culture and ethnicity to what is already an incredibly catchy and savvy track. While 'Kralizec' is by no means an ordinary song, it however pails in comparison to the latter sections of "Origin" which is what really sets alight Kralizec.

Fundamentally rooted in black and death metal is about the only point of genre reference for the mystifying metal imprints of Kralizec, as they cut through a hypnotic 38 minutes. As stated previously 'Kralizec' is the bread and butter track from "Origin" and a perfect stepping stone towards the rest of the material on their debut album. If you were to take the avant-garde experimentation employed by Emperor on "Anthems to the Welkin at Dusk," the aggression displayed by Decapitated and the sheer musical excellence of the most technically proficient bands in the metal genre, and then work it into the essential mix of black and death metal music that Kralizec are obviously so gifted in, then you would have some hint of what "Origin" is about. Take the track 'Sailing to the Origin' as a testimony to the musical class of Kralizec. Topping out at 9 minutes, it is undoubtedly their trump card on "Origin" and displays a giddy mesh of the quietest black metal crooning, dark melancholic atmosphere, a sumptuous injection of fat guitar riffs all supported by the multi-vocal assault of slithering black metal rasps, haunting spoken words and death vocals wrapped in complete despondency.

I severely hope that each one of you reading this review look up "Origin." With all the crap each one of us (media) are presented with on a daily basis it really makes a difference to get a record that is fresh, enthusiastic, diverse and honest. These are the features that set Kralizec apart from the pack, and it only remains for you guys out there to give these blokes the time of day they deserve.

Bottom Line: If the metal community doesn't welcome Kralizec with open arms then we may as well pack up our bags and go on home. To leave this sort of musical capacity unnoticed would be a grave sin, indeed.