Are you ready for some more Swedish carnage? Defunct now bodies spread deadly disease and you have to smell the stench of yet another dismembered cadaver. Living on the edge of sanity and afflicted now with pain the only destination for you is grave [the pun here and there is intended of course :] The most current flow of new Scandinavian bands, especially those with the classic Swedish death metal sound, is pretty strong again. Be on high alert for Nominion! Read what Perra, the band's drummer, had to reveal. 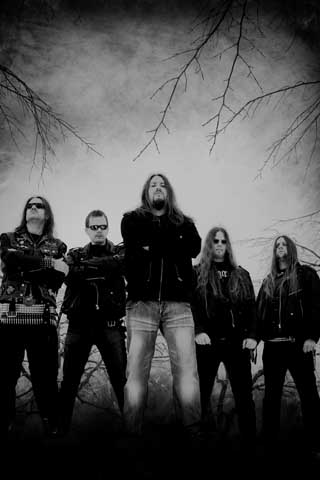 It's about putting a lot of time and effort into it, it's not about having fun.

"Terra Necrosis" gathered some good reviews all over the planet and after a while, can you tell us, if given a chance to go back, would you change anything about this album?

Definitely not. We are extremely pleased with everything about this album. The material and musicianship is as good as it can be. We were all pumped about making a classic fucking album. I guess one could say we deserve a few good reviews, it means nothing in the long run still, as the most important part for Nominon is to continue to write some of the most rotten yet interesting Death Metal even in the future to come.

How would you describe your writing process?

We pretty much work the songs out after some certain guitar riff's and try to build and arrange it altogether to a song at our rehearsal spot. A few of the songs on "Terra Necrosis" were actually written in my living room where we had some small studio equipment at the time, songs like 'Infernal Voyage' and 'Hell Above' for example.

Is it true Tomas Skogsberg wanted to record "Terra Necrosis," but you have refused?

That's NOT true. Tomas is a good old friend to me personally as well as Nominon. The fact is that we actually thought of recording our previous album "Recremation" there if we had a label that could have paid for the recording, but we decided to sign with Konqueror Records back in 2004 and as they are not a big label we had to go down a bit financially and record the album at Necromorbus Studio. The result of "Recremation" pleased us as well as our fans very much, so we decided to go back to record even "Terra Necrosis" with producer Tore Stjerna at Necromorbus Studio. I don't have a clue if Nominon will ever record at Sunlight again, but I wouldn't mind doing that even though if it was only for a couple of songs or whatever. The thing is that Tore/Necromorbus is an old huge fan of Nominon, and he has been putting so much effort in making our recordings at his studio sounding as good as possible, and that makes us feel comfortable about working there too, you know.

Seems like your line-up has had quite a few changes over the years. So far, do you think that the current one is the strongest so far; how are the relations in the band?

Sure, that's true. But if we hadn't made these changes in the line-up Nominon would never have become what it is today. It's hard to keep people that are not interested to continue playing with you, you know. Juha is the only remaining "original" member, but he keeps telling us that we are all "original" members. The guys that are in Nominon now definitely work to take things to another level. That is to continue to play Death Metal with lots of interesting hooks and done with the ancient spirit. So, yes, I guess you are right when you say that this line-up is the strongest of them all so far. The Nominon of today is more of an entity with an own identity strong enough to wage war and conquer, than five guys playing together.

Murder Squad chose Autopsy for the sole music inspiration. Being a cover band [if you had to choose to play exclusively under the influence of one particular old Swedish death metal band] which one would it be and why?

Merciless because they are the best fucking Death metal band ever. 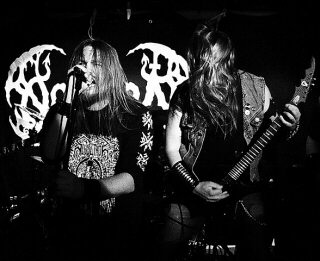 That famous footage of Entombed 'Left Hand Path' video clip did some really good promotion for Swedish scene back then in the 90's. Is it an inspiration to maybe out-do the masters in making some classic flick in years to come?

Nominon have already done a video that is in the same league as that particular video, for the song "Hordes Of Files", featuring Dave Suzuki (Vital Remains) as a special introduction host. The difference between our video and the Entombed video is that they are or even more correct, were, on a big label when they made the video shot back in 90/91. I mean that they could easily get the video to be shown on bigger TV-stations and such.

How is your new material working out at concerts; is there a song that just "has to be played" at each of your performances?

Right now we are playing six songs of the latest album "Terra Necrosis". Altogether we play mostly around 9-11 songs in a live situation, depending if Nominon are headlining the show or not. As of now I guess the "must play" songs are "Life Extinct", "Release In Death", "Black Chapel", "Ebola" and "Among The Beasts And Ancient Slumber" from the latest album. Then we have the two undeadly classics "Submit To Evil" and "Hordes Of Flies" from the "Recremation" album. It's harder from the debut album "Diabolical Bloodshed", the track we mostly play from that one is the opener "Malicious Torment". We also like to play a few older and more "Rare" songs like "Invocations", "My Flesh", "White Death" and more recently "Blaspheming The Dead" as well. We could easily play for 2 hours or something you know. When we rehearse we play more or less every damn Nominon song there is.

I heard it is really hard to play live shows in Sweden [if I'm wrong correct me]. So far you did few European tours. Where would you not go any time soon in the future?

I guess Sweden has too many bands, too many really shitty and trendy clubs. We rarely play around here due to the fact that no one would even pay us like transportation costs or whatever. It's much more fun to go and play down in Europe or whatever as support to a great Death Metal band that might be a bit more known than Nominon. We have so far toured with Benediction, Vital Remains and Nunslaughter and all trips has been great fun. Right now we are negotiating about playing tours and festivals in Europe as well as in the good old USA next year 2008 [they are going to be a part of the line up for 2008 Central Illinois Metalfest in Urbana, IL, USA - ed.], so hopefully something good will come out of that. By the way, I am pretty sure that Nominon won't be playing in Africa or China in the nearest future, to answer your question.

You have been around since 1993 - is there something that you consider the craziest shit you've ever seen/done, and left a permanent imprint on your minds? If so, what is it?

Too much man, too much. Sharing a nightliner with the hooligans of Benediction was a trip since day one. They are pretty wild, not compared too myself at times though, but pretty close. We always end up drunk more or less all of us after a show, that's one of the good thing about playing Rock'n'Roll you know. Play the show, drink up, make people suffer and walk away untouched. Something "normal" people would never have the brain to enjoy and/or understand. I don't care about the fact that I might die tomorrow, so fucking what?!