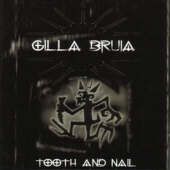 Why do I say a compilation? And by metal alternatives I mean the less common genres of the metal universe; stoner, doom, etc, etc. Anything not from the globalising death and black metal scenes, really. Gilla Bruja combine all the efforts of a mid 90s Sepultura tribal metal influence, with that of grind metal elements, along with sporadic industrial features with classy and cheesy TV samples, and maybe a hint of sludge/stoner rock. Sound good? Well if the truth must be known, I’m still trying to decide what to make of it all.

“Tooth and Nail” is a pretty diverse record and interesting enough to keep a Pakistani inside an Indian strip club. I mean don’t get me wrong, the concoction that Gilla Bruja whipped up with “Tooth and Nail” is hardly rocket science material, but works well enough to be sufficiently fulfilling.

The downsides of “Tooth and Nail” are also a little numerous and probably do as much harm as they do good for the four lads from the Mexican death cult (Gilla Bruja was named after a Mexican death cult). The samples of the aforementioned cheesy TV cuts, while gimmicky and able to initiate a smile on occasion do get tiring really, really quickly. The other large point of annoyance is the vocals from Paul March aka Wilda Beast. This fellow possesses a decent set of nuts and has the ability to make a fine death or grind vocalist; the downside to this is that he sounds absolutely terrible on the more industrial tracks, ‘Whipped’ being one such prime example.

However while the detractions sink this record considerably they are not really enough to relegate it to the bottom of the CD pile, in fact maybe only around half way.

Bottom Line: Initially a highly entertaining record letdown by a few weird moments and poor selection decisions by Gilla Bruja. “Tooth and Nail” is good enough to recommend to those into a different side of metal or wanting a change of upholstery.