An odd band that plays odd music for equally odd folk. That is the best way to describe how Gilla Bruja go about their trade. I consider myself odd, and I sure as hell know that Paul March from Gilla Bruja is an odd bloke, so we have a good situation happening. Fortunately, Paul manages to have a temporal lapse in his oddities and willingly flings up some dirt on the non-believers of society, whilst being all in favor of the faithful. Umm... please read on. 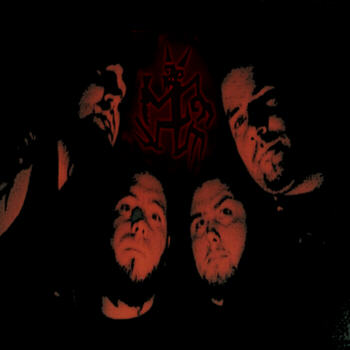 Congratulations on "VI Fingered Jesus," a masterful follow up to "Tooth and Nail." It surpasses it in every way. So, what made you guys decide to form the band?

Many thanks. We formed the band out of boredom, and the need to work out some of the stuff that makes life so fucking awful. It’s an outlet, a chance to scream and do something productive. Plus I'm a real big horror fan and that had to enter into it at some stage.

How did the name for Gilla Bruja come about?  It is in reference to a particular Mexican death cult, right?

I found it in reference to a really old book written in Mexico. It's about all the legends and urban myths at the time, one of which was the Lizard Witch death cult. They would surround a town at night, killing the unbelievers before dawn and taking the faithful, leaving the town as crow-towns, or places of slaughter.

One of the most striking features of the new record is how much you have upped the tempo and level of musicianship from "Tooth and Nail." Where do you see the improvements in "VI Fingered Jesus" over "Tooth and Nail?"

"VI Fingered Jesus" breathes more, its more concentrated, more to the point, and a bit less eclectic. We read what people said about it and the production and tried to think what we could do about it. I think we're getting there.

Do you guys subscribe to any particular genre of metal/extreme music?   From my reckonings you follow a philosophy of "if it sounds good, we'll be sure to throw it in."  This can have positive effects as can be seen with your current record in "VI Fingered Jesus" or perhaps more negative outcomes, I think "Tooth and Nail" suffered from having too much going on at once.

"Tooth and Nail" definitely had too many different influences on it for most people to handle, and a lot of the purist types almost formed lynch mobs for us whenever we played live. I guess we subscribe to the original genre of extreme music. A lot of the scenes are populated by people happy to follow and content not to innovate. They're basically scared that if they're different no one will like them so they don’t try. I hate cowards. I feel an affinity with the experimental nature black metal has taken recently and of course bands like Godflesh and Ministry. Basically any band that says, Screw it, this is my music and I'm going to make it the way I want to hear it." We make music for ourselves.

The Retribute press statement lists Gilla Bruja as being an abrasive mix of Godflesh, Prong, Helmet, EyeHateGod, Iron Monkey, Skinlab and Pissing Razors. Do you follow any of these acts with what they are doing record wise?

Hmm. I like all of the above. I'm a big fan of Iron Monkey, but it seems everybody is these days. Godflesh and Prong are fucking cool too. But I also listen to Tom Waits, White Zombie, and The Misfits.

On both records you make reference to the 'non-believers,' first in the small narrative on the last page of the "Tooth and Nail" booklet, and then underneath the 'Thank You’s' in the "VI Fingered Jesus" booklet. These non-believing folk seem to be referred to in stark contrast to the 'faithful' and the chosen six-fingered fellow as depicted in the narrative on "VI Fingered Jesus." Is this going to be a concurrent theme for future Gilla Bruja records? Can you explain this to me?

Yeah, it will continue. He's out there somewhere and she's talking to him, calming him and making sure he looks after the faithful. We are dealing with a real thing here. This cult existed and brings with it a curse of sorts, and we have an obligation to make sure that it is mentioned. You don’t use a name like Gilla Bruja without being very careful. The faithful, as far as the band is concerned, are the people who have bought the CD’s. They are the hardest most dedicated souls around, and they supported us. The people who have helped us and turned up to the gigs - they are special and deserve to know this and to know that we are grateful to them. The brothers and sisters of our extended family, people these days don’t have anything. Take it from me; I know what it's like to be alone in the world. Gilla Bruja is a haven for them. The non believers are the people who have tried to break me and my band apart with their lies and fucking back stabbing. We still have problems playing live because of all the fucking people who hate us because we won't toady up to them and we don’t know the right people. But you know, I'd rather only play once a year than let one inch of my hard work and my band be spoiled by these cunt bastards.

Being the ridiculously diverse musical entity that you are there must be a lot of bands that inspire Gilla Bruja to come up with the madcap antics that you have managed to record for "Tooth and Nail" and "VI Fingered Jesus."

Hell, too many to mention, but that's what makes us interesting!

Is Gilla Bruja planning on doing many gigs in support for "VI Fingered Jesus"?

Madcap, hah, that's just about right. We are always trying to play live. I want to play everyday of the year but we all work for a living. We plan to tour Germany in October and we are trying to play as much as possible.

Samples seemed to play a distinct part of "Tooth and Nail," as though you built songs around some of the samples you did. However, I think it has been an important development for Gilla Bruja to use the samples to provide for a subtle backbone to the tracks on "VI Fingered Jesus" rather than having them take too much limelight on a particular song. Your thoughts on this?

You know, I love the samples but yeah they are a bit subtler. Now they are there to build atmosphere and less is definitely more. The amount of grief we get for using samples is amazing. "You can't do that," they say. God, what's happened to extreme music? People don't want bands with any fucking character?

'All For Blame' presents a different side of Gilla Bruja, particularly with the conflicting vocal styles used. This track has a distinctly more accessible tone to it. Are you guys planning on exploring the style employed on 'All For Blame' in the future?

Well there's always 'It Fades Away' on "Tooth and Nail" as well. I like to use my voice differently. I think on the next record there will be more clean singing, but it's got to be done right. We have always done bits, but I would like to try it more. I don't know if it will be more accessible, but the best way to make something look darker is to put something lighter next to it.

"VI Fingered Jesus" has been out for a few months, enough time to get sufficient fan/press feedback. Have you been satisfied with comments from folks around the globe?

You know, most folks have all been really nice about "VI Fingered Jesus." Even people who didn't like us have said that it's ok, which is real nice of them. I think some people in the underground were hoping we would go away but that's not going to happen.

Where to for Gilla Bruja now? What looms on the horizon for you guys?

Other than the suspicious death of our enemies and the even more suspicious raising of our brothers and sisters into positions of power and influence, well, more gigs I hope. More mayhem. I haven't been arrested for several months and I'm starting to feel way too comfortable, hah. We might try and do a video for 'Spoiler' in the next few months, which will be complete 'Angel Heart,' horror-inspired stuff so it should be cool.

Hey, a big cheers to you for answering these questions. "VI Fingered Jesus" is a pole-drivingly good record. Keep it up for record number 3! I look forward to the future!

Thanks again brother. It's always nice to talk to a believer.