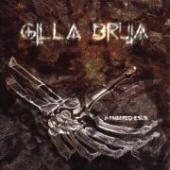 A very peculiar entity in the 'extreme' music world. Trying to paint an accurate portrait of Gilla Bruja is akin in attempting to paint the Eiffel Tower in a lovely pink shade; it's not going to happen all too successfully.

Gilla Bruja's original effort in "Tooth and Nail" (circa 2001) was something of a hit and miss record – certainly a case of too many cooks spoiling the broth. In other words, an over inclusion of too many elements lead to a record that might appeal initially to folks, but soon their interest would fade as they realize that "Tooth and Nail" was not really focused enough to make for a decent listen. However, "VI Fingered Jesus" makes up for all that went wrong on album number one, by blowing it clean out of the water.

Album #2 sees Gilla Bruja completely ditch the weaker industrial elements that hampered their proceedings on "Tooth and Nail." The Wilda Beast's vocals have gone up a notch for "VI Fingered Jesus" and really complement the aggressive murky sludge laden doom style that Gilla Bruja have got happening this time around. The production is clearer, the songs snappier and tighter. Gilla Bruja have really managed to do a complete 180 and successfully materialise into a far more fearsome monster in the metal world. "VI Fingered Jesus" is worlds apart from its predecessor. I definitely recommend a long, hard look.

Bottom Line: Clearly cutting off the slabs of fat, Gilla Bruja is a far more trimmed and toned athlete for race two. Don't expect "VI Fingered Jesus" to be winding up last in any heats this summer.