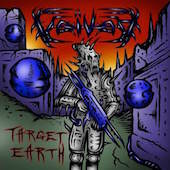 The latest Voivod CD, Target Earth, has to be one of the most anticipated releases in recent years. Sure, Infini was released only back in 2009, but for whatever reason Voivod is one of those bands that just solicits fanaticism with each release. A lot of people might have thought that with Piggy's passing the band would and should just call it a day, but such is not the case, and happily so.

Anyone familiar with the later years of Voivod's career knows full well that the all-in thrash assault of the early years is left to antiquity and nostalgia nowadays, but that matters very little when hearing an album of such fine quality like Target Earth. The album opens with “Target Earth”, a groovy metal romp through the fray of the accepted lines of progressive-singed metal. I really liked it, especially the chorus which is sort of ethereal and quite memorable. When “Kluskap O'Kom” emerges it's really apparent that Voivod is pulling out all the expected stops and is bent on creating a sort of proggy/metal hybrid that switches gears and tempos in the blink of a bleeding eye and tramples the anticipatory reservations of the fan base. The thickness of that ugly bass sound adds such a perfect element to the album's sound, and the jazzy feel to some of the lines makes the underlying base all the more enjoyable.

The initial single “Mechanical Mind” left me quite excited for the entire record to hit, especially after hearing how the band seems to, yet again, mix and match sounds and tones to an almost nonsensical brilliance. I actually had one friend comment that the sound is about as close as alternative can come to metal without actually going completely over to the 'dark side'. While I've long considered metal music to be the true alternative music if for nothing else the definition of the word alone, I can see the point and comparison. By no means is this 'alternative' in the media sense of the term, but I can see a broader audience enjoying some of the tracks on Target Earth; now, whether that's good or bad is entirely up to the listener and fan to process, but Voivod is still Voivod and reaching a less-informed audience can't always be a bad thing. This isn't your father's Metallica, after all.

“Resistance” is one of my favorite tracks from the album, followed closely by “Artefact”, which is unforgivably heavy and possesses that thick bass line I mentioned before that rumbles underneath like a belching fault line. I'm not entirely sure how any fan of Voivod can be disappointed in Target Earth; this is the total package in terms of what you should come to expect from the band. The luminous aspect of this album is what makes it so widely enjoyable; the stripped down approach to the music, all the while making it interesting and fresh, is the truly 'artsy' sum of all parts.

I still remember hearing War & Pain way back when and wondering why the band refused to learn to play its instruments correctly, but you know...out of the mouth of babes and all? As that album grew on me over the years for all of its primitive charms, the subsequent output from Voivod seemed to get stronger and better, and this latest record is just another flag for the band's poop deck. For the fan that needs familiarity wrapped inside a fuzzy new fiber, Target Earth provides a fascinating jaunt through the progressive-metal landscape that challenges you to dismiss it as something less than excellence.