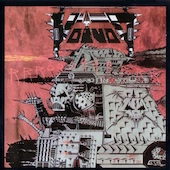 After the radical and anarchic debut, Voivod returned with Rrröööaaarrr and already its name gave the hint that the French Canadians still spat on conventions. I was almost 18 years old as the record was released in March 1986 and I was happy that I had survived War and Pain, the most challenging vinyl in my "career" as a metal head. No doubt, titles like 'F**k Off & Die' or 'Slaughter in a Grave' sounded as if I would reach my personal limits anew, but an inner voice gave me the order to buy this full-length and so I jumped head over into the next "Voivodian" adventure - not without a queasy feeling.

Of course, the shock effect of the debut cannot be re-created. It hit me without warning, while I was immediately jumping in the next trench after having put the second vinyl on my turntable. This is probably one of the reasons why this album stands in the shadow of its predecessor. The quartet is still ugly, rebellious, non-conformist and sometimes dissonant. The production has a chaotic charm as well, but the absolute insanity of War and Pain does not come back. I admit that sometimes each and every musician seems to play his own song without taking care of what his peers are doing. 'Ripping Headaches' and 'Horror' come to my mind in this context. But generally speaking, the band makes it a tad easier for the listener to get access to the songs. 'Slaughter in a Grave', for example, has a more or less conservative song pattern and a concise chorus. Voivod do no longer insult their audience during the entire playtime of the album. They enjoy their music in their own cosmos without taking care of anybody else. Snake still celebrates its individual style of eccentric, punk-influenced singing, screaming and shouting, some solos of Piggy (R.I.P.) border on chaos and the rhythm section also sees no sense in holding back its destructive power. But the mind-blowing vehemence of the first full-length remains unrivalled.

Nevertheless, Rrröööaaarrr does not build the bridge from the debut to the pretty technical Killing Technology. It has much more in common with its predecessor than with the third full-length. Fine nuances are not on the agenda, the guys rumble through the botany (guess this is not really English, but I cannot accept that Voivod broke every rule while I have to stick to the correct phrases) and they use any means available to generate their nauseating overall picture. (Of course, this picture only unsettles miserable mainstream posers...) This does not exclude a pretty smooth flow of single songs. Especially the comparatively straight 'Thrashing Rage' creates a surprisingly homogeneous picture and seen from today's perspective, some of its part seem to be recycled for 'Order of the Blackguards', my highlight from Killing Technology. The best songs of the here reviewed vinyl do not reach the airy heights of this masterpiece, but nobody needs to fear lukewarm elaborations in view of the untamable energy of the band. Don't be fooled by the slow beginning of the closer, the dudes fight with uttermost belligerence to the bitter end - and thus it remains a secret why the reviewer of the German Rock Hard called Voivod a power metal band (in #17 from 1986)...

From an objective point of view, the rumbling and blurred sound can be regarded as a sheer disaster, but the rolling hate tank on the cover is not looking for highly precise solutions. His devastating mission exactly asks for this noisy yet adequate mix. It takes the songs by the osseous hand and gives them the possibility to shine in their very own, very special and very crude form of beauty. It is therefore no wonder that some Spanish metalheads with a weakness for extreme sounds decided to choose their band name in almost exact accordance with the name of the opener. Rrröööaaarrr is an exciting natural force, although it is sandwiched between two (of my) classics.