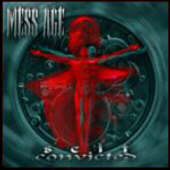 Mess Age is clearly an outfit that doesn’t thrive on the originality and mind-blowing alterations to their metal, but instead works at reliving the golden years of the thrash eras in the 80s and 90s. While there is an abundance of bands that do go about rehashing old guitar licks/themes on albums today, but I do not have a problem with Mess Age’s new album; “Self Convicted”. While not doing anything overtly bold and radical on “Self Convicted”, Mess Age do have one prodigious aspect attributed to them, that being that they are a band who are fun to listen to.

5 lads from Poland playing an infectious brand of death/thrash metal that is traditional and turns back the clock and “Self Convicted” is pure enjoyment to listen to. I mean fun as what In Flames has done for the metal industry. “Self Convicted” is so damn catchy and enthralling to listen to that it is almost impossible to sit or stand still. Every riff and every note is backed by expert guitar playing and contagious vocals from Raaf (which incidentally are not much different to the roaring done by Daemon on Zyklon’s “World Ov Worms”, although far more upbeat and not as morose). The drumming is truly cool and has the same sort of production values as what Nick Barker’s did on “Puritanical Misanthropic Euphoria”; making you want tap your hands on your knees, beat your feet on the ground or even slap your girlfriend on the ass to keep in time with the skin beating of Otwieracz.

Bottom Line: I don’t care that “Self – Convicted” isn’t the most original and genre defining record, but I can assure you that if you do end up picking up a copy of this work of art that it will be one of the more loveable albums of the year.