Mess Age are an amalgamation of current death metal mixed with some damn fine riffs which wouldn’t be too hard to find in an early 90s or late 80s thrash concerts. Enthusiastic and invigorating, "Self-Convicted" was their debut album, released under the all Polish label; Conquer Records. Vocalist Raaf roars his way through some 40-50 odd minutes of death/thrash carnage and also takes time out to have a bit of a chat to me about the past, present and future of Mess Age (between his obsessive binge-drinking). 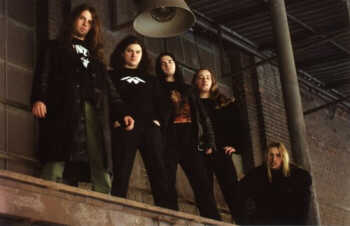 Firstly thanks to Mess Age for answering these questions for myself and Metalbite.com. I think your new album; "Self - Convicted" is brilliant. It has some truly phenomenally catchy moments that make it for me one of the most fun albums of the year.

Hello to you all! It is very nice to hear such words, [laughs]. It is a pleasure for us that "Self-Convicted" is heard to be something worth listening to. We are hopeful that there are more people like you!

You must be very excited with the reactions "Self – Convicted" has received?

Truly we don’t know what is overall response of "Self-Convicted" at this stage – although the album was recorded in January, the whole CD was ready only in March. Sending promos and waiting for responses takes so long, but for a few weeks we have started to receive a few play lists from radio stations and quite a lot of interviews. I think we have to wait until 'the promo machine' will gather momentum and you can read about us in every magazine, [laughs]. I’m very impatient especially when I think about the Polish underground. I’m very curious what will people say who have known us for many years. I don’t hide the fact we are very surprised and glad with the response from outside Poland... We didn’t expect such kindly words...

What inspirations does Mess Age receive for doing the "Self – Convicted"? Is there anything specific? I mean, I can certainly here some early 90s and late 80s influences in the album albeit with a much harder and ultimately heavier take on things.

When we were working on our debut album we didn’t think of what kind of metal we are going to play. We haven’t worked and won’t work in such way. You can hear 80’s and 90’s because we grew up listening bands like Iron Maiden, Slayer and many more. In the meantime there have been a lot of new bands, many things have changed, also Mess Age members. Many studios have bought new equipment, and the level of technical ability has increased – that’s why so many bands can sound so good.

Mess Age has recorded a few demos; "Resurrection" and "Fallen", as well as a split album with Shadows Land, which was released by Demonic Records. I am not familiar with these earlier works by Mess Age, are they in the same vein musically as "Self – Convicted"?

I would like to correct your question – we have released three demo tapes – "Resurrection", "Fallen" and "Reborn", which one was released by Demonic Records after that we released it by ourselves. Those three demos were quite familiar to Mess Age nowadays. But there are few differences that make "Self-Convicted" the best stuff we have recorded until now. The most important thing is that today there is no female vocals in our music. Joanna left Mess Age in Autumn 2000, so there are only my growls, [laughs]. The second thing worth mentioning is fact that for over four years playing together we have learned a lot, we are more experienced with good and bad things and I’m convinced now we are more mature, musically. 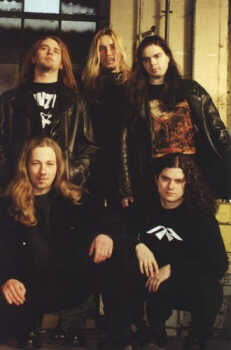 What do "Self – Convicted's" lyrics speak about? I have read some of the lyrics... following them along in the song (as all people do, right?) and the lyrics seem to be centered on a psychological basis, is this correct?

Our lyrics tell about human behaviours: fears, dreams... there is no stories about ghosts, riders on horses or anything like that. There are three authors of lyrics and we all are keen on mental life. In our lyrics you can find many things not said in one way – there are many metaphors, comparisons and insinuations. I believe that good lyrics should have as many interpretations as readers.

Speaking of lyrics again, I noticed looking through the "Self – Convicted" booklet that almost all the lyrics are written by Strzalek, except for the tracks 'Among the Empty Walls' and 'The Existence Door' by Gruby and 'Devoured With Famished Eyes' by you. Why is this? This guy is not a part of the musical input and the band from what I can gather...

Strzalek is my cousin. He is quite close to Mess Age but he isn’t member of the band. He has always helped us with lyrics because I haven’t yet discovered the gift of writing the lyrics myself. Sometimes we drink (a lot of) beer and talk a lot about new ideas for lyrics. Sometimes it took few minutes to write it down but next time it may take a few months. It depends on the mood (and of course the amount of beer, [laughs]!!!).

The production for "Self – Convicted" is extremely sound. I think the drum tracks have a really tight sound which add a nice element to the death/thrash sound of Mess Age. Every instrument is in the mix well, with the drums always being there in the background, which I think is very good for this style of metal.

We wanted to mix drums louder but during mastering the drums got hidden. We like production with drums on the front nowadays, but we are conscious that music we play is mainly guitar music. Well, everyone likes something different.

You have a very familiar sounding voice to me, but I can’t quite place it. Do you draw upon any other renowned vocalists for inspiration for your growls?

I have always wanted to create my own style. I’m aware of the unconscious influence taken from the bands I’m listening to. I’m not keen on renowned vocalist – I like vocalists from Sweden – especially the Entombed singer, and of course J. Ch. De Köer from Gorefest!

What is the idea behind the 'Mess Age' name? Is it 'Message' with a typo or does it have a separate meaning to 'message'? It certainly is one of the more puzzling band names in metal.

The idea of name for the band is taken from one of the Public Enemy’s albums (it was an idea of our bassist brother). We thought it would be suitable to the world chaos and to chaos in our heads, [laughs]... we were 16-18 years old so we had a 'mess' in our heads (I think we still have it, [laughs]!!!). 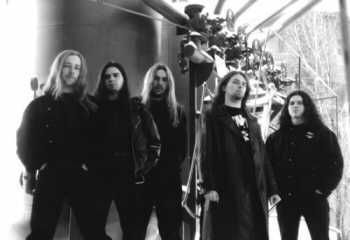 Does it help having Conquer Records as your new label, being that they are fairly Polish, and all other bands on the label are Polish, too? I think one of the major obstacles for labels in this day and age is the communication can sometimes be mishandled from different languages and other barriers. I think your situation is quite ideal.

Every band in Conquer Records is a polish band. It helps us a lot to speak in the same language because my English isn’t good enough to communicate without mistakes. The second advantage is that we have the same polish habits, if you know what I’m talking about, [laughs]... (something tells me Chris from Metalbite could inform us as to the Polish habits).

I would like to propose a question of how suited you think the current metal market is to Mess Age and the "Self – Convicted", do you think there will be a continuing appreciation for albums from Mess Age? I think the metal market goes through many strong trends. For example in 95-97 we had the symphonic black metal, 97-2001 were many melodic death metal acts and who knows what the future holds?

We fuck metal market trends! We play and create music 'cause we like doing it. All Mess Age members work in different places and we don’t think that one day we won’t have to go to work. The band is our hobby which takes a lot of time and our money but we still do what we love and we are glad that there are people who like listening our music – thanks a lot!!! We are still in the underground and we don’t seem to be the band on the top. We are recording our stuff for the pleasure of playing concerts for our fans and of course for fun in straight way. What will the future bring? Who knows...

From the ashes of Alienator and Age Crisis, Mess Age was formed way back in 1998. I have not heard either of the aforementioned bands, but were their styles somewhat similar to Mess Age, or was Mess Age a completely new musical direction that you guys headed in?

Those bands were very amateur (we were young bloods!). I haven’t heard Alienator but Age Crisis was quite similar to future Mess Age style because Gruby (bass) was the main composer of the music we played. He still does one hell of a job for the band.

Have you penned any new works for another album? I ask can we expect a new Mess Age album in the same metal vein; death and thrash as "Self – Convicted" or will Mess Age write something completely new?

During the holidays we want to write a few tracks for a new album because we are playing a tour around Poland in November. We have three tracks till now and each one of them is different. I hope we will surprise (not only ourselves), but also our fans. Be patient!

That is all I have for you at this stage. I hope you guys are as successful as you deserve to be and I hope to catch up with one of you regularly for future albums.

Thanks for interest, greetings from Poland and see you on some gigs some day!