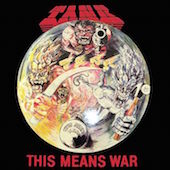 Type: Full-Length
Release Date: June 10th, 1983
Label: Music For Nations
Genre: Heavy, NWOBHM
1 Just Like Something From Hell
2 Hot Lead, Cold Steel
3 This Means War
4 Laughing In The Face Of Death
5 (If We Go) We Go Down Fighting
6 I (Won't Ever Let You Down)
7 Echoes Of A Distant Battle
MetalBite on YouTube

Empirical studies have proven some predictable results. 100% of mankind think that Ozzy would have had more talent for any other job than singing and the same percentage is of the opinion that Sabaton is no band but a modern plague, comparable with pest, leprosy or the Irish potato famine. Other results are less clear. 50% of those people who bought Tank’s third work thought “this must be a joke” while listening to the opening, trance-like keyboard tones of 'Just Like Something from Hell', the first track of the album. The rest thought “this must be a bad joke”. But it wasn’t, and (surprise, surprise) the keyboard sounds kicked off an album that showed a new yet attractive facet of band.

By the way, Tank were no three-piece any longer. No, they had not integrated a keyboard player, thank God, but a second guitarist, Mick Tucker. Maybe he left his mark during the song-writing process, because Tank now sounded like a band that had grown up rapidly. The seven songs of This Means War were based on more complex structures. They revealed a previously unknown depth and a newly gained seriousness. The punk flair of the debut, which had already begun to vanish on Power of the Hunter, was now almost completely gone. Instead, songs like 'Hot Lead, Cold Steel' showed male (not macho) metal art, muscular with a working-class attitude and a brilliant solo that would never had gained access on any punk-oriented album. The mostly unsung heroes of the New Wave of Tibetan Heavy Metal (find the error) had reinvented itself between August 1982 and June 1983. This deserves respect – as long as the result is convincing. Fortunately, this was the case here.

Admittedly, the pretty repetitive '(If We Go) We Go Down Fighting' did not give me the creeps and 'I (Won’t Ever Let You Down)' failed to deliver the basis for the wildest headbanger-session ever. But both tracks have good parts, especially the opening riff of the 'If We Go)…' and the chorus of the latter know to convince. Moreover, it was an ironic twist of fate that exactly the title tracks slightly suffered from a lack of belligerence. Nevertheless, the entire album is full of meaty riffs, honest rudeness and genre-compatible melody lines. The fast-paced and valiant opener marks a strong, excessive statement right at the beginning, because every detail fascinates: the riffing, the solos, the chorus, pick out whatever you want. Not to mention Algy’s unclean, raw and charismatic voice. His vocals stand in contrast with the somewhat polished production. Tank do not present their material in a silky sound, but they had an eye on the balance between comfortable listening and a metallic fundament. The songs reflect this balance as well. The opener and the title track concentrate on an excellent flow, while 'Hot Lead, Cold Steel' offers bulky riffing.

'Laughing in the Face of Death' is the track that builds a bridge to the previously released albums. The aggressive number brings back the juvenile stubbornness and fans of keyboard sounds get nothing to enjoy. It’s a strict, straight and simple kick in the balls of the mainstream conformists. The closer 'Echoes of a Distant Battle' features the strength of Tank 1983 for the last time: a great riff that pulls the listener into the song immediately, a good flow, a memorable chorus and a neither progressive nor primitive, easily accessible pattern. It is the last representative song of this creative period of the band, by the way, a highly creative period (three albums within 14 months). This Means War is probably that album of Tank everybody must know if she or he wants to get in contact with really strong material of the more or less legendary formation. It’s the link between the roughshod early works and the series of pretty smooth albums that started with Honour & Blood. Moreover, it was the final work where the Brabbs brothers had been involved. Empirical studies have shown that most mothers want to have their sons at home instead knowing them on boozy concert tours. Greetings to mum Brabbs, hopefully she is still alive.