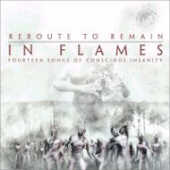 The change is so there, but if you take away expectations to the point to where musical direction is concerned and has been going, then you won't object to viewing this album in a negative connotation or have a false belief. Sure, it's different, it may not be totally melodic death metal, it does have its melodic death moments, but now it's meshed into 2 genres, maybe more. The guitars are still heavy, but the music/vocals rear into a different form. They do use more electronics and clean vocals, some to the extent to think this album is somewhat in the vein of metalcore but it isn't all like that.

What impressed me the most is the music, vocals, production and mixing as well as the lyrics. I can't see myself writing off this release to just be total crap because I wouldn't be being honest. If I thought it was just a sell-out album, I would've already stated that, but I'm not. So keep in tune to what I have to say here. Yes, there is a lot less aggression, there are heavy guitars though they're not playing very fast, there are electronics, their approach is totally different and they basically don't want to keep playing what they've been playing since their founding in 1990. It's just a change.

Talking more about the music, it seems like their concept was more to the effect that they wanted to mesh 2 genres together, melodic death and groove metal. They also throw in some thrash sound into it showing their influences genuinely. This I think is good. What blew me away is obligatory, but it was the lyrics which made the music so much more desirable. They're using the words which weren't overly harsh to mesh with the guitars. The clean vocals are a reflection of just how they are now, more exclusively than past releases for sure.

I like every song on here. I think the rhythm guitar shows the brutality even though they're not playing at fast tempos much. In Flames was never too big on making music that was overly fast, just melodic. The riffs here are thick, but they still have that melodic feel to them. They're expressing more art-work with this one and people kind of knew that the band's evolution was changing into a more laid back vibe to their songwriting than anything else. I don't think that their effort was just to go commercial with this one, I think it's just experimentation.

Definitely worth checking out on YouTube especially the title-track and "Cloud Connected." Don't just consider though what I think or others think of the album, consider what you think. I don't think that I'm totally off on this. Maybe it's among some of the highest ratings on the album altogether, but it's just what I think. Think "melodic/groove/thrash/metalcore" and you'll have all of those styles in here. I like it more than their new album, but I like most of their releases anyway. That's not because they're In Flames, it's because they put out quality music.

Throughout the entire genre of melodic metal, no one sticks out more for me than In Flames. Being one of the bands to ignite the spark of melodic death metal in the mid-90s, they continue to stay at least one step ahead of the rest. Nowadays it seems all too common to hear a band playing almost exactly what they did six years ago. Thus, it makes me incredibly happy to see bands like In Flames continuing to forge ahead musically while still keeping their unique style in tact.

Like many of you I approached this cd with much trepidation. Once the cd was in and the volume was up, however, my anxieties were soon put to rest. Instead of setting the tone for the record musically, In Flames decided to do it lyrically. The lyrics for the title track are placed alone on the first page of the booklet. Beneath them is a picture of a play button. This is a way of saying either you can move forward with them or stay behind. The choice is yours!

The majority of the tracks on this album are very much what one would come to expect from In Flames. Some tracks remind me of "Clayman", "Colony", and even "Whoracle" in some places, yet they are different in the fact that they are aided by a more well rounded production and an increase in vocal and keyboard melodies not just guitar melodies. There are still plenty of those patented In Flames’ guitar harmonies to be heard but the band make it a point to not just survive on those alone but to try and do other things for a change. The album itself is one of the most diverse metal albums of the year so far. Tracks like ‘Drifter’ and ‘Egonomic’ bring back the thrashier feel of the group’s earlier material while ‘System’ and ‘Transparent’ combine the In Flames style with the feel of modern American metal.

One of the standout tracks is a completely clean sung and acoustic track entitled ‘Metaphor’. Dubbed as “the country song,” this track has struck up quite a controversy as of late. The first time I listened to it I was unsure about what I truly thought, that is until the percussive driven interlude began. Backed by harmonious violins, this section of the song is one of the most beautiful things I have heard from this band yet. For me the song is a highlight. Another notable track would have to be ‘Dark Signs’. The song showcases some of Anders’ strongest vocals to date and has one of the catchiest choruses they have ever written.

The thing that pleases me most about this cd is its diversity. In Flames manage to take a bit of everything they have done and put it together while proceeding to try new things. This also marks the first time the band have traveled outside of Studio Fredman to record an album. Now we see the melodic section sharing a little more space with the rhythm section resulting in a fuller sound overall.

In Flames have charted a new route on the road of melodic metal. Whether or not you follow them is completely up to you. I am certainly glad I did. Fans of “Colony” and “Clayman” should not have a hard time getting into this one. Fans of “Jester Race” and “Whoracle” who believe the band have been on a slump since then will most likely not enjoy this cd. If you find yourself somewhere in between these two standpoints, then this record is definitely worth checking out. There is a pretty good chance you will enjoy it! I believe that this is In Flames’ most accomplished and inspired work thus far. Highly recommended to fans of pure heavy metal and open-minded melodic death metal fans.

Bottom Line: A dynamic and diverse musical offering from one of the top melodic metal bands around! If you liked “Clayman”, then odds are you will love this one!