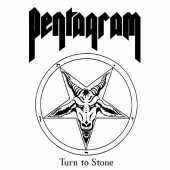 The oldest of the bands under Peaceville Records “Classic Collections”, Pentagram is the band that most deserves to have their thirty-year plus history summed up into one album. “Turn To Stone” combine’s songs that can be found throughout Pentagram’s career on Peaceville Records, with material dating as far back as their debut album “Pentagram” in 1985 until their last Peaceville Records effort, “Be Forewarned” (Pentagram released singles and such in the early ‘70’s, and thus their tri-decade existence). Straightforward, to the point, and simply a combination of various songs on the aforementioned albums, “Turn To Stone” is a good introduction for those that are new to Pentagram.

It looks as if Pentagram is Black Sabbath’s younger brother. Vocalist Bobby Leibling performs with his obviously Ozzy influenced vocals, and guitarist Victor Griffin shares quite a bit in common with the early Sabbath days. Still, it’s safe to say that you shouldn’t completely attribute Pentagram as being a Black Sabbath tribute band in disguise.

Each and every member of Pentagram has a fair amount of talent. The rhythm section is very strong and high in the mix, the lead and rhythm guitar absolutely slay together between their doom theatrics, and the vocals absolutely fit the sound of Pentagram. The songwriting from most of the material found on “Turn To Stone” is very well written and highly enjoyable. While Pentagram isn’t wholly original, it’s hard to turn down a band that can churn out song after song that rocks the way it should.

If you own the three albums Pentagram released ’85 and ’94, there really isn’t any reason for you to pick this up. Otherwise, if you’re going for a best of collection, “First Daze Here” is overall, probably a better pick because it’s more to the point and covers the material better. Nonetheless, “Turn To Stone” is a good barebones representation of the heavier days of Pentagram and it wouldn’t hurt to pick it up.

Bottom Line: Well done, Black Sabbath influenced metal. Nothing more, nothing less, but Pentagram do what they do well enough to garner credit.