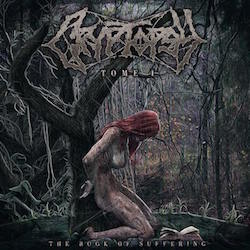 Type: EP
Release Date: October 30th, 2015
Label: Independent
Genre: Death
1 Detritus (The One They Kept)
2 The Knife, The Head And What Remains
3 Halothane Glow
4 Framed By Blood
MetalBite on YouTube

So, it's been three years. Three long years since the self-titled album from legendary Canadian tech-death masters Cryptopsy.

While I think it's safe to say that The Unspoken King didn't go down too well with loyal Cryptopsy fans, their self-titled was a much-welcomed return to form. There were elements of that album that truly surprised me, and while this is not as surprising, mainly because the band have gone back to their roots, it's still an incredibly solid EP.

What we have here is what I would call a mixture of Whisper Supremacy with And Then You'll Beg, and that's a very fine place to be for Cryptopsy. Back are the frenzied, seemingly out of control guitars, manic drumming, excellent bass playing and dare I say it... really good vocals. I think this is the first release in which Matt McGachy really fits the band and their sound, and seems to be in the groove of things, hammering out his lines with power and conviction. In fact, it's so ideal that I am able to freely focus on just the music without having to worry about the vocals.

What we have here is classic Cryptopsy firing on all cylinders. The band don't ever really take a break for the four songs on this EP - they just constantly pummel your senses every chance they get. Flo's drumming is outstanding, simply amazing. One of the most creative drummers in his field, easily, and here he just blows everyone else away. A lot of technical death metal drummers are pretty straightforward and while incredible technically, just write boring and predictable drum patterns. I'm not sure if he works at it a lot especially, or if it just flows out of him naturally, but I like to think that he's just playing what feels natural to him. In any case, the drum performance here is very impressive, but that can be said about literally any Cryptopsy album. The drums just grab you, and they have a way of taking a groove and just driving it into the ground. Tension upon tension upon tension, and finally the inevitable explosion of power and fury. It really is an art form.

Guitarist Christian Donaldson also does a superb job, considering he's the only guitar player in the band now, but it seems like he's had the time he has needed to really settle down and get into the swing of things. His riffs and general performance are outstanding and let’s not forget he's doing this all on his own. It's odd not seeing Jon in the band, but honestly, the way it is right now seems to be perfectly capable. Olivier Pinard is a legendary bassist in his own right, and he's nothing short of solid on this album. While not exactly a bass driven performance this EP is, you can hear that he's doing the business behind the wall of guitar and drums.

The song writing is excellent and to the point, there's no filler, everything on here is set to annihilate. The mix and overall sound of the EP is also very good, everything can be heard loud and clear, the way it's meant to be. The drums are still a bit in front of the mix, but to me that is perfectly fine. If you have a drummer like Flo in the band doing all sorts of mesmerizing stuff, you really don't want to turn him down in the mix. The guitars and vocals seem to be perfectly balanced and everything just sounds tight without coming across as overly polished.

This EP really amazed me. While the self-titled was indeed excellent, this just raises the bar just that slightly bit more. It's Cryptopsy at their best - fast, angry, and with tasteful riffs and song writing. Really, this is not to be missed. This reminds me of the Whisper Supremacy days, and that is absolutely euphoric for me. Great job guys keep it coming.

Cryptopsy bring a very abrasive approach to the table. It is technical, yet visceral in nature. The songs here are hard hitting and make the best of the short 4 song run time. I’ve always thought of Cryptopsy’s song-structures as somewhat chaotic and this isn’t about to change here.

The dizzying guitar and drum work is sometimes compelling, but at other times over the top. It doesn’t quite reach high levels of over-indulgence, but there certainly could be some tightening up involved. This is how the band performs, however, and the sort of disjointed aspect does indeed help the band’s sound at times. Cryptopsy perform some of the fastest and most brutal death metal and this can be seen across this EP. The sound is certainly of the new type with more robotic sounding riffs appearing here. There hasn’t been much of a change to the core sound on recent releases and for the most part this continues the trend. The Knife, The Head and What Remains for example brings the same up-tempo carnage that could be found in songs from the s/t album or …And Then You’ll Beg. Though the EP can be a fun listen at times, one wishes this band would bring more cohesion to the table.

The frenetic brutally of the band is nice, but when compared to the likes of other brutal releases like River of Nihil's Monarchy, the overall sound doesn’t bond quite as brilliantly. This makes Cryptopsy the type of band that would be better to listen to in pieces because an entire song is never completely conceived. Still, you could do far worse as a choice for your brutal death metal listening experience. There are many moments on this album that are undeniably a complete blast to listen to. It just seems that this band could perform an even higher quality if they tightened the screws a bit.