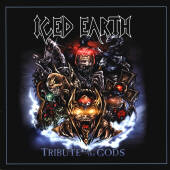 If you’ve been into metal for a long time, there is a good chance that you’re big on the metal classics. Bands like Iron Maiden, Black Sabbath, and Judas Priest are probably played on your stereo daily. If you like those bands, there is a good chance that you enjoy Iced Earth, or at least parts of their discography. Iced Earth, like you, love those classic metal bands and decided to dedicate an entire album to cover songs played solely by themselves, entitled “Tribute To The Gods”.

As a band, Iced Earth is pretty respectable as songwriters and musicians. Since Iced Earth’s music follows in the footsteps of those classic metal bands, they’re a superior choice when it comes to choosing who should play these tribute songs.

It’s nice to hear a modern take on these older songs. The production is great, giving all of the songs a new feel. John Schaffer’s rhythm is impeccable, thunderous in energy, and precision in the truest sense of the word. Schaffer is what makes or breaks these songs when comparing them to the older versions. Matt Barlow does a good job performing the vocals as close to the originals as he can, but it’s very hard to live up to the vocals that have been imprinted in nearly everybody’s mind. Other than that, I have no complaints. Richard Christy is unquestionably an amazing drummer, and Larry Tarnowski’s lead guitar is quite impressive.

The problem with tribute albums is that it’s near impossible to recreate the songs as well as they were originally. “Tribute To The Gods” is exactly that – a tribute; not a shot at surpassing the bands that created the songs. I’m sure Iced Earth knew that when they created it, and that’s what happened with “Tribute To The Gods”. It’s a good shot, and definitely one of the better ones, but there is no way that Schaffer and Co. can make songs by Iron Maiden, Blue Öyster Cult, Judas Priest, or Alice Cooper as awesome as they already were.

Bottom Line: “Tribute To The Gods” is an album that should be picked up only by those hardcore Iced Earth fans, or anybody that craves classic metal.