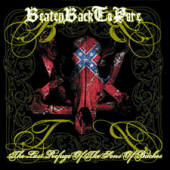 Kicking it off where things were left on “Southern Apocalypse”, “The Last Refuge Of The Sons Of Bitches” rolls on into the scene leaving a wake of bloody buffalo in its path. Introducing acoustic sections, clean vocals (which are something of an interest, adding another cool dimension) and way more dynamic song writing, Beaten Back To Pure have created a nice little package for us folks to hear.

However dynamic and intense this new record is, it does take a little while to grow on you. After a few weeks the proverbial penny dropped for me, and it was smooth sailing for many further moons to come. This is the sort of album that doesn’t blow your socks off with mind-blowing riffs or rhythm sections (well, maybe a few), but lingers around the room biding its time to release the full-blown fury on you.

Comparisons to Alabama Thunderpussy, Eyehategod, Pantera and the like are inevitably going to happen, but I really don’t think they are going to do either party much good. I feel Beaten Back To Pure with “The Last Refuge Of Sons Of Bitches” blow everything those three bands have recently released clean out of the whisky. If you can imagine the good old rock feeling of Alabama Thunderpussy, the slow menacing dirge of Eyehategod, and the pure power of Pantera, but with a more metal feel, then Beaten Back To Pure should have something that will appeal to you. Even if these bands don’t sit well with you (which some of them don’t with me), I still urge you to check Beaten Back To Pure out; the infectious quality of the songs really raises “The Last Refuge Of The Sons Of Bitches” to a new plain.

Bottom Line: My review doesn’t even do this album the justice it deserves. There are so many excellent qualities that one can enjoy on “The Last Refuge Of The Sons Of Bitches”; the Boss Hogg’s vocals are plain nasty, but have so much melodic atmosphere going for them at the same time; the guitar licks are too catchy to describe; and the drumming is akin to a ninja turtle: a lean mean fighting machine. Check this album out and you won’t regret it.