Beaten Back To Pure - Interview

Beaten Back To Pure is an oddity in the metal world. While there exists hundreds of clones for death metal and black metal, finding two bands that play the same sort of stuff that Beaten Back To Pure does on "The Last Refuge of the Sons of Bitches" would prove quite a handful. I was strongly impressed with their second effort and as a result sent out these few questions to Vince, who handles the guitar work for Beaten Back To Pure. Well, hell man! I'm glad you approve! It was our every intention to bump everything up a notch on this record, from production to content. Glad you noticed. As far as "...good driving music", that's how 'Wheels Comin' Off' got its name. Aural Nitro's, I suppose.

Lyrically, what is "The Last Refuge of the Sons of Bitches" about? I tried reading through the lyrics but about half way through 'Wheels Comin' Off' my eyes started to get really sore. The writing and color combination for the lyrics inside the album booklet is painful to look at.

Lyrically, this album goes from bad to worse: from domestic violence to overindulgence. The font we used in the CD insert looked better before the final press. It wasn't intended to fuck with your head, but if it does, that's good too. Try again after a 12 pack of Foster's. Impossible!

How much more of an accomplished piece of work is "The Last Refuge of the Sons of Bitches" than "Southern Apocalypse"? For me this album is head and shoulders above "Southern Apocalypse". I'm not sure if it is the more dynamic songwriting, the clean vocals, or the just the plain catchy elements of this new album. I think the main aspect that I attribute to this album over your last work is that Beaten Back To Pure seems to be having a lot more fun with it. You seem to have rid yourselves of any inhibitions that held the band back on the last album and truly played through with your potential that "Southern Apocalypse" only hinted at.

Well with this record, I knew that I would be producing it myself, so that gave us a lot more time without the pressure of an hourly rate hanging over our heads. That also meant that there was a lot more room for some of that "studio magic" shit. I don't know if we had more fun with it, but we had more to drink and everything was a lot more laid back.

What happened to Erik from "Southern Apocalypse"? Has the transition of Richie into the band been smooth?

To give you the shortened version, Erik went and settled down. We don't even know how he's doing these days. With Richie, he was always around, so I guess we knew who to talk to when Erik split. Richie is a local guitar hero. It's funny how many fuckers know of him around here. He's a laid back guy with good shit to offer, so we like him ok.

I have seen quite a few comments related to Ben's clean vocals with this album. They are impressive, to say the least. Why did he wait until "The Last Refuge of the Sons of Bitches" to open up? Was it just a recent realization to use clean vocals, or did they just not fit with what was going down on "Southern Apocalypse"?

I'm pretty sure the clean vocals were the last thing a lot of us expected from Ben. We had been talking about a lot of shit concerning Beaten Back To Pure's vocal stamp. But then again, who really gives a fuck. It's just something we decided to do. It was just a matter of time, I suppose. 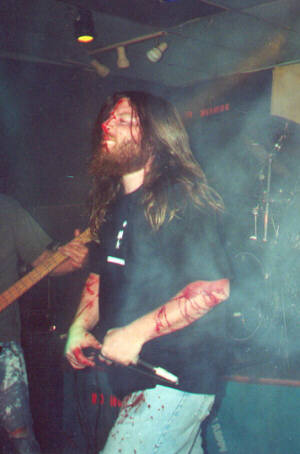 Have press reactions been in awe of "The Last Refuge of the Sons of Bitches" or what? The more and more I listen to this record, the more and more this album is going to feature as one of my albums of the year.

I'd say the reviews have been 90% better on average than our last album. I think this rock-n-roll thing is rubbing off on some of these fucks. Album of the year! Give me your address and I'll send you a case of your favorite American beer! Or maybe that's no good...

Does it annoy you when you see reviews of "The Last Refuge of the Sons of Bitches" and "Southern Apocalypse" and for the most part they contain so many 'southern' connotations? I am talking whisky, cactus, shotgun, desert, moonshine, and stuff like that.

Yeah, sometimes I guess you got to wonder if they are being dicks about the southern influences, but then again, we don't give a shit about them either. I don't even think any of us has even seen a real desert, but I'm down with guns and booze, if that helps!

One of the best aspects of this record is the clarity in each song, the ability for each instrument to clearly feed off each another through a beautifully audible sound. Do we have Sniper Christian Studios to thank for that?

Did someone pay you to say that? Yeah, I guess that's the bottom line of what we tried to do. Make everything audible all the time. If you and another couple hundred thousand metal-heads believe that shit, then we're in business god damnit! By the way, it's just Sniper Studios now. I got rid of the Christian! I had a little trouble with that shit!

I would love to check out a Beaten Back To Pure live performance. The crowds must be really getting into the groove and accessibility of "The Last Refuge of the Sons of Bitches". Let me know if you ever come to Australia.

Actually, I think we come across more 'pissed off' than 'groovy' when we play live. People don't know what the fuck is going on sometimes! We are quick to empty a family type of environment! One guy said it's like Mercyful Fate meets Lynyrd Skynyrd. I don't know? If we're ever in Australia, you'll be the first Aussie I look up! Make sure your beer cooler is stocked!

Speaking of crowds, do you think this album will appeal to those outside the metal world? I mean, barring the growls from Ben it's a pretty good record for those who don't really dig metal, but they probably could find something in "The Last Refuge of the Sons of Bitches" to enjoy.

Yeah, we hope so. It hits on a lot of shit we're influenced by and that's the way we like it! Hopefully others do too! If not, fuck 'em! 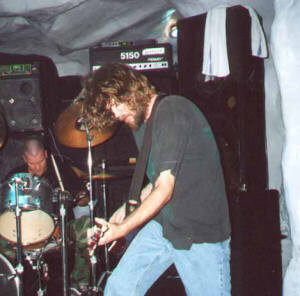 Retribute Records is certainly doing a fine job for you guys. I see promotion all the time in the biggest magazines, like Terrorizer. Chris is a top bloke, and he is certainly developing quite a comprehensive list of talent on the label roster. Are you into any of the bands (other than yourselves of course) with Retribute? "Remnants of Deprivation" by Visceral Bleeding is one of the coolest sounding death albums I have heard this year from Retribute.

Chris and Retribute are definitely the oddballs of the metal world! He does what he says he's going do and in a timely fuckin' manner! Not the norm for small labels (if you know what I mean). If we ever get to hang with the man, we'll definitely throw back a few! Cheers to Chris and Retribute! As far as I know, there is no 'incest' at the Retribute! We're glad to be on the roster along with bands like Visceral Bleeding and Rwake.

The guitar solos are something that initially snared my interest and kept me coming back to this album in the early stages of listening to "The Last Refuge of the Sons of Bitches". I am talking songs like 'Carry Me Back to the Old Virginny' which from about 2:30 minutes on is just made for air guitar. There are so many cool solos on that track.

As I'm sure you noticed over the last 10-15 years, the use of solos of any sort have been almost non-existent. I think it was mostly because of some of the 'bubble gum' bands of the 80's being lumped into the category of metal. This fucked-up a lot more shit than that, but we'll leave it alone for now! I don't suspect we will ever be a band noted for our solos, but we dig a bit of that shred-time on occasion.

You guys mix a lot of elements from a lot of different aspects of heavy metal and hard rock. What used to influence you starting out? And in relation to that, what influences you in today's music scene?

My biggest influences, especially as a kid, were Black Sabbath, Trouble, Slayer and Mercyful Fate, to name a few. We all have some pretty varied interests in music, but in today's music, I guess my interests are more in the likes of Isis, Cave In, Weedeater and lately, I've been spinning the shit out of the new Floor album!

What now for Beaten Back To Pure? Heaps of touring/promotion for "The Last Refuge of the Sons of Bitches" or time to kick back, and take it easy?

Well, we could never hit the road as hard as some bands, but we try to do our part to piss off folks in neighboring cities and states as best we can. We hope to do a decent jaunt maybe in January so we can get our 'road legs'! Maybe VH1 will come with us and do a special... or not.

Thanks for taking the time out to answer these questions, Vince. Good fucking luck in the future! Feel free to proudly promote "The Last Refuge of the Sons of Bitches" here...

Let it be known that anyone needing further info on Beaten Back To Pure for merchandise, shows or a place to visit to put you on the F.B.I.'s shit list, visit www.beatenbacktopure.com. Also, we'd like to thank Metalbite and crew for giving a shit! Cheers!