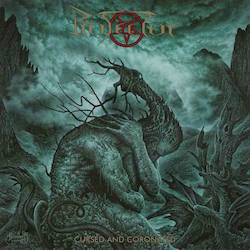 In my humble opinion, Protector have published two great or even fantastic albums, Golem and A Shedding Of Skin. The other releases are usually okay, very solid and do not suffer from major flaws, but that's it. Cursed And Coronated, the album from the year 2016, joins the ranks of these albums, but it is not far away from Golem. The full-length definitely delivers a nice portion of thrash, although it naturally does not have the bonus of a classic album. At the end of the day, it doesn't matter. The ups and downs of the band do not come as a surprise in view of the constantly and completely changing line-ups. However, Cursed And Coronated, the second full-length after the comeback, has more to offer than the well-designed artwork. 'To Serve And Protect', for example, is a great thrasher. Its lyrics do not deal with the police of the US of A, but they are about the rise of metal. Not very original and rather poorly realized, but the composition is based on abysmal riffs and smoothly flowing instrumental parts. The double bass does its highly appreciated work and Protector prove that they still have a talent to create thrash-compatible melodies.

Moreover, the dudes also write lyrics about more original issues from time to time. Let me mention 'Selfdestrugtion' in this context, because an anti-drug song is always noteworthy. Furthermore, let's put the spotlight on 'Crosses In Carelia'. As far as I see, its text deals with the Winter War between Finland and Russia. In terms of music, the song combines ugly sections with high-speed outbursts. In terms of ugliness, Martin Missy carries the main burden - and he does a good job. He expresses any kind of negative feelings very well. The only drawback is that the lyrics are very short with the effect that he repeats some lines again and again. And as we are considering formalities, I still hate the recycling of previously released songs. This time we find 'The Dimholt' and 'Terra Mater' anew. This means that neither 'The Return Of Thrash And Madness' nor 'In The Vein Of Blackened Steel' house any longer exclusive material... Martin Missy, please explain me occasionally why I bought these vinyl’s.

These details aside, Cursed And Coronated is the work of a band that does not lack of integrity. The songs of the mainly Swedish formation do not break with the traditional songwriting of the once German band. Even the tradition of the more or less funny song at the end of the regular album is maintained and 'The Old Boil' feels free to give the listener a straight slap in the face. Only the eerily bubbling, slow-moving title track is less demonic than it wants to be, but all in all, Protector implement their musical visions successfully. This is not surprising with regard to the place where this work was recorded. The name "Sunlight Studio" - and "Tomas Skogsberg" as well - stands for quality. Hence it follows that Cursed And Coronated is equipped with a clear, powerful and biting mix which does not lack pressure. The result is a very homogeneous album without questionable experiments, but with a rather needless bonus section (three pretty raw live tracks). Good album!

Last note: the album is dedicated to the departed heroes of Rock 'n' Roll and one finds Jeff Hanneman, Paul Baloff or Chuck Schuldiner in the list. So far, so good. Yet who the f**k is a guy called John Lennon? Never heard of this buddy. Maybe this is the triangle player of the first Protector line-up? Pertinent hints are welcome.